Alcatel has just recently announced their new lineup of smartphones this 2013. And one of those smartphones is the new World’s thinnest smartphone, the Alcatel One Touch Idol Ultra. This phone is just 6.45mm thick (thinner than the iPhone 5), weighs only 110 grams and is built with features that are commonly found in a high end smartphone. 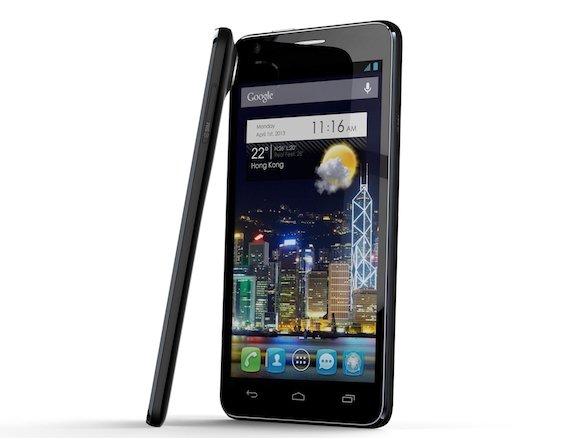 The Alcatel OT Idol Ultra is powered by a 1.2GHz dual core processor with 1GB of RAM, and runs on the latest Android 4.1 Jelly Bean OS. It has a nice 4.7-inch HD AMOLED display at 1280×720 pixel resolution and 312 pixel per inch density. It also has an 8 megapixel rear facing camera and a 2 megapixel front facing camera, which has become a standard on a midstream to high end smartphone. It also has a WiFi 802.11 b/g/n, WiFi hotspot, HSDAP 7.2 Mbps, Bluetooth and a microUSB connectivity.

But because of this thickness, just 6.45mm there are few things that were sacrificed just to achieve the slimness of this phone. First is that, there is only 8GB of internal storage. It also does not have a microSD slot, so you’re stuck with a merely 8GB of storage.

There’s also no 3.5mm audio jack which I think is a major disappointment specially for those who are music lovers. They will have to rely on bluetooth headsets/devices if they want to hear music privately.

The Alcatel One Touch Idol Ultra is expected to be released this January 2013, but only in China. No words yet for international release. If this were to be released in the Philippines, the price would probably be around Php 15,000-20,000.

Aside from the OT Idol Ultra, Alcatel will also be releasing One Touch Idol (little brother of the Ultra). The One Touch Idol is said to be the lightest smartphone ever. But your stuck with a much lower specs compared to the Idol Ultra, and it’s even more disappointing than the Idol Ultra. Sure you got the thinnest and lightest phone, but you also sacrificed some major or key features of a good smartphone.