AMD has recently announced its 2nd Generation A-Series Desktop APU processors that are based on Trinity architecture. The new 2nd generation APU lineup includes A10-5800K, A10-5700, A8-5600K, A8-5500, A6-5400K and A4-5300. The new desktop APUs features four x86-64 cores (depends on the model) that are spread across two Piledriver microarchitecture modules, and built with Radeon HD 7000 series graphics core. It also sports 384 stream processors (for the highend) down to 128 stream processors (for the low end), an integrated northbridge and dual channel DDR3-1866 MHz integrated memory controller. 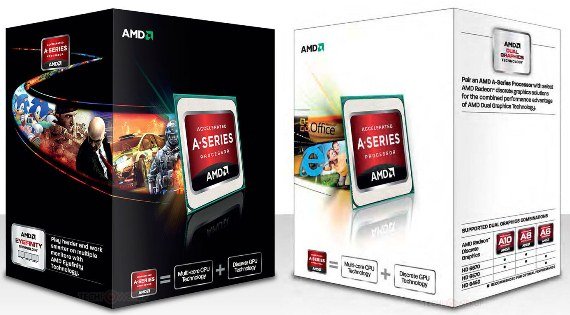 The AMD APU A10 and A8 has 4 cores in total, but the A10 has more stream processors with 384 compared to A8 that has only 256 Radeon cores. The A6 and A4 are dual cores but they also differ in the stream processor and the GPU that they carry. Below are more details on the specifications of the respective 2nd generation A-Series APU processors.

If my guess is correct, the models A10-5800K, A8-5600K and A6-5400K have their cores unlock. That means more room for overclocking. Pricing for the said processors are still not confirmed. But I’m sure they offer a more affordable price compared to AMD’s rival.