6 Facts About AMD’s black AM3b socket: The AM3 vs AM3+ match

AMD has already a new socket type, the socket AM3+ or AM3b MB, for their upcoming AMD FX Zambezi processors based on AMD’s new microarchitecture, Bulldozer. The socket AM3+ is also known as the black AM3b socket.

Motherboard manufacturers like Asus, Asrock, MSI and others have already begun manufacturing AM3+ motherboards and you can already see their AM3+ MB line up in their respective websites.

Since AM3 motherboards can support Zambezi FX processors through BIOS update, why did AMD improved their socket AM3 to socket AM3+? What are the changes that were made from socket AM3 to AM3+? Let’s take a look at this AM3+ vs AM3 match. Here are 6 things about the AMD AM3b black socket.

1. Noticeably, the new socket AM3+ is indicated by an “AM3b” written on the socket and the socket is color black. AM3+ has bigger pin holes from .45mm of AM3 to 0.51mm of AM3+. The problem is if CPU makers decided to make the pins in the Zambezi processor bigger in order to handle higher power current, it would not be able to fit in an AM3 socket.

3. AM3+ will have a more efficient power loadline as compared to AM3. AM3+ has an up to 11.8% increase in the power supply efficiency offering a better CPU power saving. Not only that AM3+ is pack with VDD Tolerance Load Lines providing a stable power output and better OC capability.


4. A reduction of up to 22% of electrical noise resulting in better system stability. 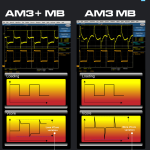 6. AM3+ now supports the Combo Cooler Retention Module or CCR making the frame to hold the cooler into a two part kit. The CCR make sure that the air suck into the cooler is blown downwards cooling the VRMs/ CPU power choke around it. But this feature in not present in all AM3+ sockets. AsRock has been utilizing this feature in their AM3+ MB lineup but there are motherboard manufacturers like Gigabyte, although used the new socket AM3+, still use the old retention found in socket AM3 MB.

Overall, AM3+ wins the match in this AM3+ vs AM3 battle. This new socket, AM3+, is definitely a good socket and is likely to compete with Intel’s 1155.