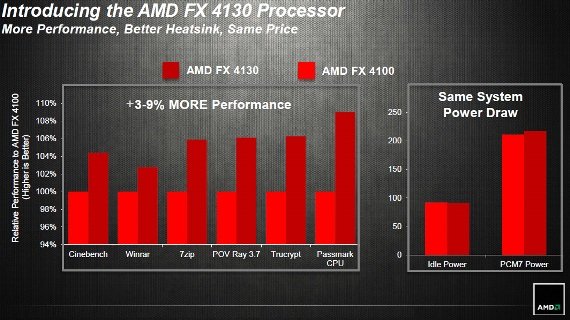 You might think that the new AMD FX-4130 is based on the old “Zambezi” silicon, since it belongs to the 4100-series lineup, well it’s not. Like I said, it’s based on the new Vishera Silicon and sports 4x Piledriver x86 cores. According to the image above, the AMD FX-4130 has the same price (more or less) with the old AMD FX-4100 but it will produce better performance, around 3% to 9%, and includes a better heatsink.

The AMD FX-4130 has a base clock of 3.80GHz and has a max turbo of 3.9GHz. It has 4MB L2 Cache and 4MB unified L3 cache, for a total of 8MB. It has AMD turbo Core and the cores are unlocked. It has a thermal design power (TDP) of 125W, with an up to date instruction-set that includes AVX, AES-NI, SSE4.2, FMA, and XOP, and should be compatible with the current socket AM3+ motherboards. 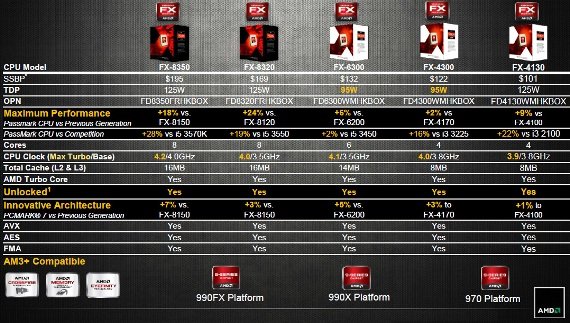 The AMD FX-4130 is also expected to have better overclocking capabilities compared to the older FX-4100, thanks to the Piledriver micro-architecture. With the price of only $100 (more or less), it’s really a low cost quad core CPU and would perfectly fit for those who are looking for a quad-core powered PC but are on a very tight budget.

You can order one now here.