Finally the dual-GPU of the AMD HD 6900 is revealed. We have witnessed and benchmark the capability and performance of the HD 6800 series. And also some of the enthusiast are already enjoying their new AMD Cayman HD 6970 which was released recently. Now it is the dual-GPU’s turn to show up.

Antilles Radeon HD 6990 is new fastest graphic card in the world. But right now we could not still determine whether it could beat nVidia’s dual-GPU graphic card, the GTX 595. 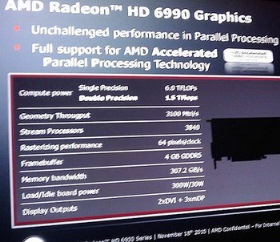 
Here is a prototype design for Asus Extreme HD 6990: