AMD Radeon HD 6970 codenamed Cayman XT is just around the corner and it will be officially released by the end of 2010. AMD Radeon HD 6970 is expected to be officially release by December 2011. But could it be possible that AMD 6970 be benchmark already? An unofficial or rumor benchmark was leaked showing the competitive comparison of AMD 6790 Cayman against its predecessors and nVidia’s graphic cards.
Read more 6970 benchmark…

Continuing with 6970 benchmark, there is no specification for the chip (Cayman XT) at the moment but a post on zol.com claims to have obtained performance figures for the video card. It was benchmark through 3DMark Vantage in performance mode. Radeon HD 6970 got a score of 23,499. Meanwhile, the card managed to get through the Unigine Heaven benchmark at 36.6fps at 1,920×1,080px with 4x anti-aliasing and 16x anisotropic filtering. from Hexus 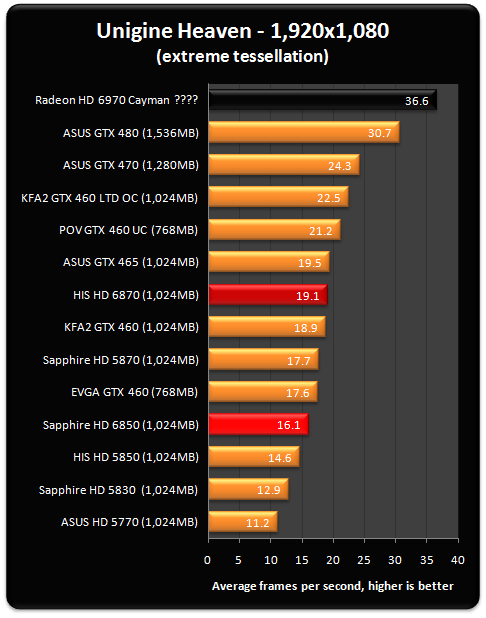 As shown in the graph above, the 6970 benchmark table, AMD Radeon HD 6970 performed better than nVidia’s GTX 480. The wild card remaining here is the GTX 580. GTX 580’s performance and capabilities has not been benchmark yet. It is still possible that GTX 580 could still beat HD 6970 since it is rumored that it would perform 20% or more from the GTX 480, AMD’s HD 6970 might settle for second place.

One interesting feature about Radeon HD 6970 is that it will only be using one six-pin and one eight-pin power connector, having a TDP of only 255W. This means that it consumes less power as compared to GTX 480.