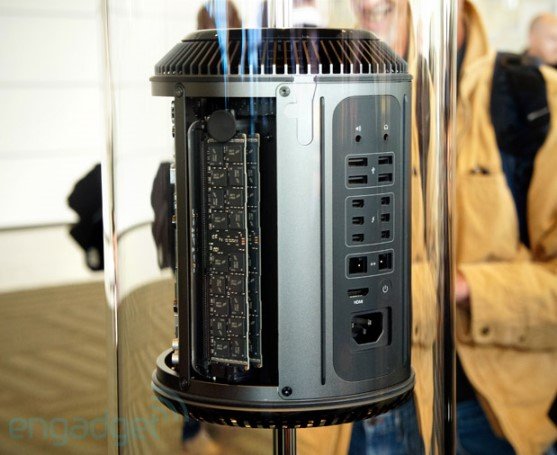 The new Mac Pro 2013 features a cylinder-like body with a unified thermal core system. According to Apple, the new Mac Pro has up to 60 GB/s memory bandwidth which is 2x higher bandwidth than the current Mac Pro. It also has a PCIe bandwidth of up to 40GB/s and up to 12 Cores of processing power. That’s 2x faster than its predecessors. For some, the designed and shape might be a joke but what’s under the hood is certainly not a joke.

The Design and Thermal Solution

The new Mac Pro 2013 has cylindrical shape body which is 9.9-inches tall and 6.6-inches in diameter. Yes, it’s small but unbelievably powerful. It has three main boards inside, two of which is for the GPU and other other one is for the CPU and memory. The input/output is located on the other side or on top the CPU portion.

It features a unique cooling system which Apple calls a unified thermal core system, where the CPU and GPU are cooled by one triangular heatsink, and the heatsink is cooled by a huge single fan.

What’s Under the Hood

The new Mac Pro 2013 is said to be powered by the latest Intel Xeon E5 processor, paired with a four-channel ECC DDR3 memory clocked at 1866MHz, which is capable of delivering 60GBps of memory bandwidth. It’s processor will be a 12 core processor with 256-bit wide floating point instructions. 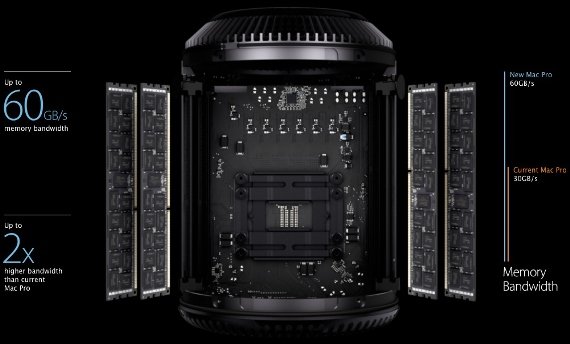 Its graphics processor will be taken care of a dual AMD FirePro W9000, which is dubbed by AMD as the most powerful professional graphics card, capable of delivering up to 7 teraflops of GPU performance. It supports OpenCL so it doesn’t support CUDA. It has 4069 stream processor, 384-bit memory and 528GBps total bandwidth.

Thanks to its GPU processing power, the new Mac Pro 2013 supports 4K display resolution via an Ultra HD Thunderbolt 2 ports, and can deliver up to 3 4K displays simultaneously.

If you are not familiar with PCI Express type of SSD, check out the OCZ Z-Drive R4 RM Series.

The Mac Pro 2013 has 6x Thunderbolt ports, 4x USB 3.0 ports, an HDMI port, a dual Gigabit Ethernet port, a speaker and headphone/earphone port. It also has wireless connectivity options such as Bluetooth 4.0, and a faster WiFi 802.11ac connection.

As I was reading the news about the new Mac Pro 2013, I also read some comments from the people. The new Mac Pro 2013 does have a unique design and a powerful CPU and GPU processing power, but it lacks expandability and upgradability. And although the design is somewhat innovative, many people didn’t like the design at all.

Unlike with the previous generation of Mac Pro, you can’t upgrade or change your GPU or any other parts of the system. You will be stuck with the FirePro that uses OpenCL. If you are a CUDA-based developer then you will not like this.

I don’t know if you are still using a DVD drive or Blu-Ray drive, but there’s no optical drive. Instead you can use an external optical drive solution if you need one.

You can’t also plugin or add additional SSD or HDD storage. It’s either you will have to buy a customized Mac Pro 2013 with a large storage capacity or you will have to settle with an external storage which is definitely a cheaper solution.

And lastly, people are expecting that the price would be way more expensive than the previous generation of Mac Pro. Most consumers don’t want an expensive flashy solution, instead they want a better but affordable solution. 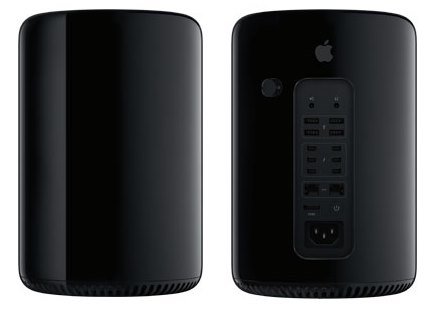