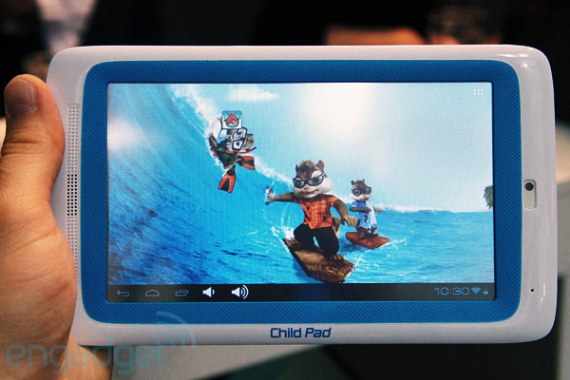 The Archos Arnova 7-inch Child Pad runs on the latest Android 4.0 Ice Cream Sandwich operating system. It is powered by a 1GHz ARM Cortex A8 processor with a 1GB of RAM. The internal storage capacity is only 4GB but you can expand it through microSD of up to 32GB.
It has a front facing camera but as to how big the camera’s sensor size is, it was not disclosed. Your kids can actually take pictures and share them through social networking sites like Facebook.

The 7-inch display is a resistive type of touchscreen at 800×480 pixel resolution. It also has microUSB and WiFi 802.11 b/g/n functionality. According to Archos, the Archos Arnova Child Pad can deliver of up to 8 hours of video playback and up to 16 hours of music play. It has a somewhat-rubberized coating at the back of the tablet to help prevent it from slipping from the kid’s hands.

The Archos Arnova Child Pad release date is said to be this coming April. And it is expected to be priced at around $129 USD.

Watch the hands-on video of the 7-inch Archos Arnova Child Pad below: