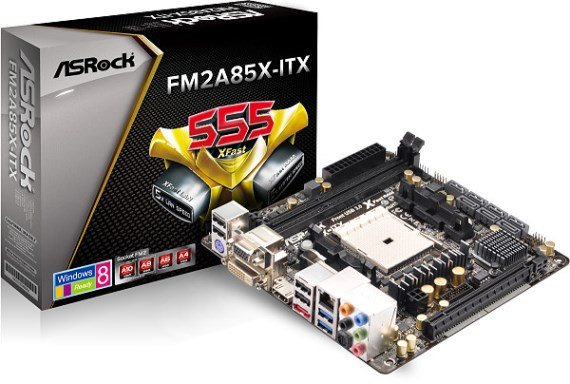 The ASRock FM2A85X-ITX draws its power from a 24-pin ATX and 4-pin CPU power connectors, just like your typical motherboard. It supports the current AMD A-Series “Trinity” APU processors, and will also support the upcoming “Richland” A-Series APUs. It has two DDR3-DIMM slots and supports up to 32GB of dual channel memory with speeds of 1866MHz.

Like most of ASRock’s mid-stream to high end motherboards (Extreme series), it’s built with gold-plated solid capacitors. It has only one expansion slot and that is the PCI-E 3.0 for the graphics card. The FM2A85X-ITX has 6 internal SATA 6Gbps ports that supports RAID 0/1/10.

The ASRock FM2A85X-ITX is expected to have an SRP of around $110 and will be available in the following weeks. I’ll update this post once it’s available for sale online.