The best time to buy a graphics card is now. ASUS, one of the topmost brands in the IT industry, announces the ‘Born To Perform’ promotion to highlight the arrival of the Nvidia GeForce GTX 700-series graphics cards. Customers who will purchase ASUS graphics cards on the month of September are entitled to join and win up to Php 5,000.00 worth of gift certificates and ASUS merchandise. 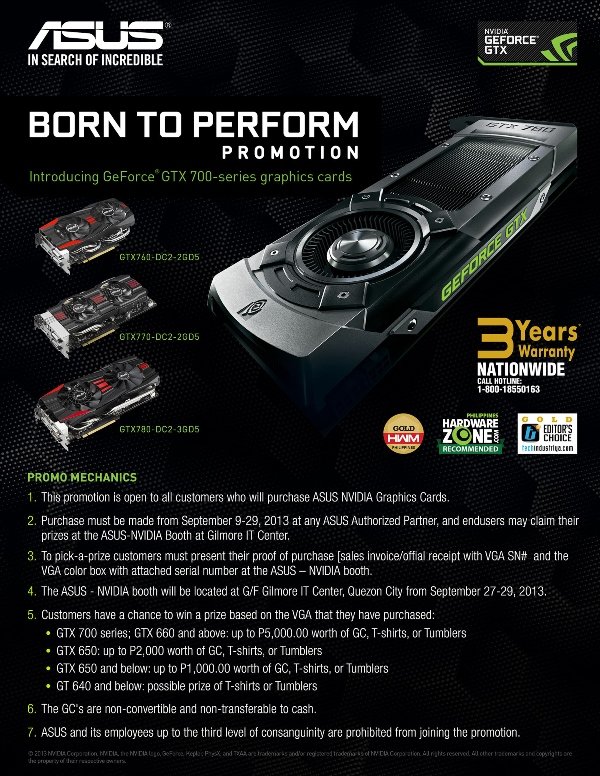 Users who purchase an ASUS Nvidia graphics card from September 9 – 29, 2013 are eligible to participate. To claim a prize, simply present a proof of purchase (sales invoice/official receipt with VGA SN#) together with the color box at the ASUS-NVIDIA booth in G/F Gilmore IT Center in Quezon City. The higher the series of the graphics card bought, the greater the chances of winning prizes. The promo lasts until September 27-29, 2013.
Power to Perform

Nvidia’s latest GTX 700 line of graphics chipsets enables users to tap maximum graphics quality without sacrificing performance. ASUS offers three variants of the GTX 700: the 780, 770, and 760. ASUS Nvidia graphics cards are clocked at an above average rate and are tempered with extensive temperature and strength controls, making it the best choice for gamers and overclockers. Three major advantages are apparent when it comes to ASUS video cards. First, ASUS has DirectCU II Technology which places copper heatpipes in direct contact with the GPU surface so heat is dissipated efficiently to the heatsink – achieving up to 30% cooler and 3 times quieter performance. Second, ASUS has DIGI+ VRM and Super Alloy Power which increases power efficiency, widens the voltage modulation range, and improves overall stability and longevity. Finally, ASUS has a software utility called GPU Tweak which allows users to optimize clock speeds, voltages, and fan speed for better performance of their graphics card than out-of-box specs.