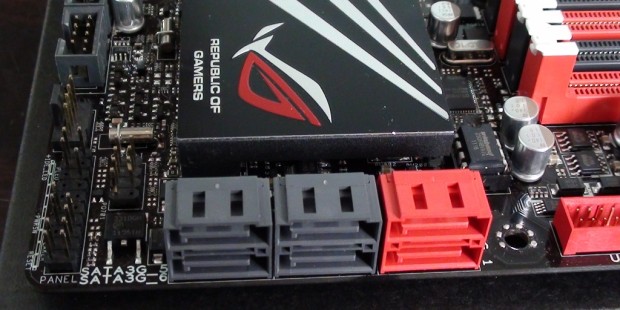 First look, isn’t right for a ROG box that is so small? For its size, no more sneak peek of the motherboard inside the flap that consists of its features and innovation unlike on its big brother the Maximus IV Extreme-Z. Still the overall package of the product is still very ROG-ish. The motherboard is encased on its own box with hard plastic cover. The package contains the User’s manual, ROG connect, I/O shield, a bag of Q-Connect, bunch of SATA II cables, a pair of SATA III cables, zip ties, SLI Bridge, DVD installer disc, ROG theme decals, case badge and HDD label sticker.

The layout of the board is still tip top spec, no clearance issue on large coolers, big graphics card and other peripherals. The overall design is still evolutionary from Maximus III Gene. Apart from the similar design, some parts of the board have improved. The faded ROG logo sign led somewhat removed in Maximus IV Gene-Z but replaced with engraved ROG with thicker heatsink on the Z68 chipset.

Up close to the MOSFET area, Asus implemented the Extreme Engine Digi+ for this board resulting very strong point for an overclocker in voltage stability. The newly designed heatsink for the MOSFET similar to Maximus IV Extreme-Z which is very effective cooling ability.

Near the memory module has GO BUTTON for quick temporary OC profile settings. 2-Phase power for memory module for extra voltage stability. Those 8-point pin are the ProbeIt that you can test the voltages using multi tester for accurate readout. Near the Z68 chipset is the 6 SATA port, the red color ports are the SATA III and the Grey are the SATA II port, easier to determine the two different SATA ports.

Near beside the 24pin EATX power port are array of leds that are useful for determine which part of the system is not working or not stable, if it passes all way up to the BOOT_DEVICE your system passed the quick stability test. Rear I/O port similar to Maximus III Gene apart from two USB 3.0 ports and HDMI port for the onboard graphics on Intel’s Sandybridge processors, one button is missing on the rear panel it’s the ROG Connect switch which you can enable/disable it to the BIOS.

Maximus IV Gene-Z sports ALC889 Audio codec that supports Creative X-Fi technology, it’s a half-baked Creative X-Fi but still near X-Fi performance on audio quality. On the EZ Button side still using the tradition START and RESET button like a starter button a sports car, but on right side of it has debug led, which is useful if you have a hard time on what went wrong to the system, debug code list is written on the user’s manual