Today, let’s take a look at one of the latest AMD Radeon cards manufactured by Asus – the Asus Radeon R9 280X DirectCU II TOP 3GB. Just to clarify, there are two different versions of the Asus R9 280X. This is the 1st version that only occupies 2 expansion slot, while the 2nd version occupies three expansion slots. Moving on, this card belongs to the top tier AMD graphics card, and it is the successor of the HD 7970. But this doesn’t feature the latest Hawaii chip. Instead, the R9 280X is powered by a 28nm Tahiti chip, meaning that it is a rebrand or refresh of the HD 7970. AMD feels that the Tahiti chip is still very much capable, and added with latest features and improved configurations, making it better and faster than its predecessors. Please continue reading my Asus Radeon R9 280X DirectCU II TOP review below and find out if this graphics card is your next upgrade. 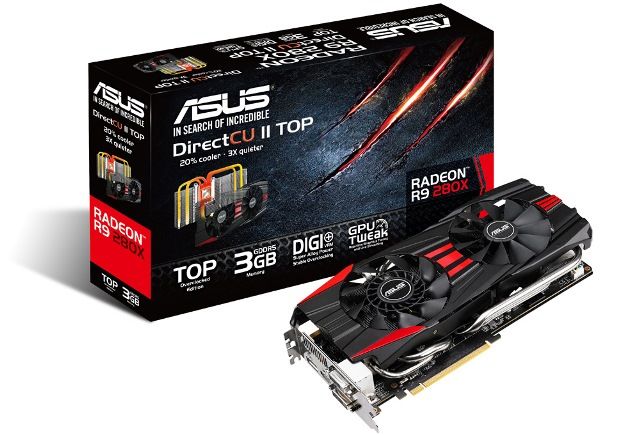 Although, the Radeon R9 208X is basically a refreshed 7970, AMD added this new technology called Mantle. Mantle, according to AMD, would allow game developers to take gaming performance in new heights. This was actually demonstrated in the popular FPS game Battlefield 4, which supports Mantle technology. AMD released a patch that would allow users to switch to Mantle, resulting in higher frames rates and better gaming experience. Unfortunately, as of to date, there aren’t much game titles yet that supports Mantle.

Moving along, the Asus Radeon R9 280X DirectCU II TOP features Asus’ award winning DirectCU II cooler together with a CoolTech Fan. The DirectCU II cooler performs much better and runs quieter compared to AMD’s reference cooler. The R9 280X DirectCU II TOP also features 3GB of memory, clock at 1600 MHz in a 384-bit memory interface. It features 2048 shader units, and a core clock speed of 970MHz (base) up to 1070MHz (boost). Of course this are already factory overclocked speeds, since the reference 29 280X has a base clock of 850MHz and a boost clock of 1000MHz. But I noticed that the card was always running at 1070MHz all throughout the test. It also features DIGI+ VRM 12-phase power design with Super Alloy Power. This improves the stability and longevity of the graphics card, even in overclock settings. Check out the complete specifications below and have a closer look at the graphics card. 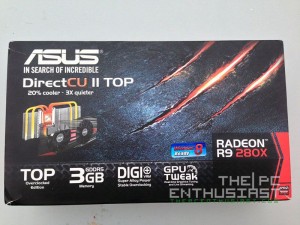 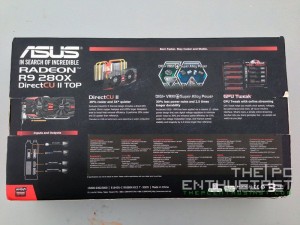 Asus is using the same packaging and design for the R9 280X DirectCU II, just like in other latest Radeon and GTX graphics cards. Well except for the ROG series, Matrix and special graphics card like the Poseidon and MARS. There is also a secondary box where the graphics card and its accessories are securely placed and surrounded by padding to protect the card from impacts or bumps. The package also includes a manual, CD driver, and a CrossFire bridge. 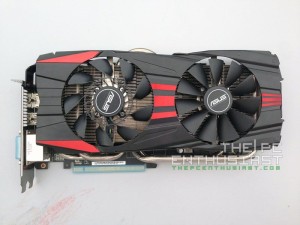 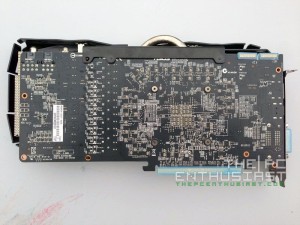 The Asus R9 280X DirectCU II TOP is somewhat a large graphics card. Its 11.2-inch long and 5.7-inch thick. But it only consumes two PCI slots, just like any high end graphics card nowadays. It doesn’t have a backplate but there is a metal support (right picture above) which is located on one side of the card.

Honestly, I feel that Asus should make a different cooler design for Radeon cards, and another design for GeForce cards. Why? Because they all look the same, specially that they feature the same DirectCU II cooler. At least they could have put some slight changes or accents that would make them easily identifiable. Well that’s just my opinion though. 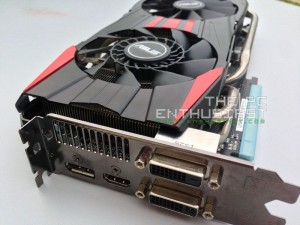 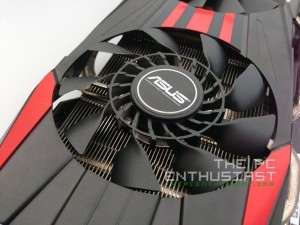 On its output panel, there’s a DVI-I port, DVI-D port, an HDMI port and a DisplayPort. You can connect up to 4 display monitors simultaneously and it also supports Eyefinity.

The Asus R9 280X DirectCU II TOP is one of Asus’ graphics card to feature a CoolTech fan. Just a though, if this fan is that good, I wonder why they only put one CoolTech fan, instead of two for better cooling performance? Perhaps to cut cost? Anyway, below is a demonstration showing the difference between a CoolTech fan and a traditional fan. 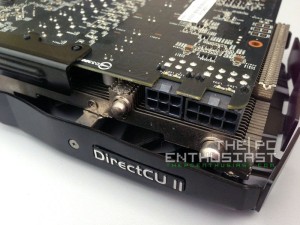 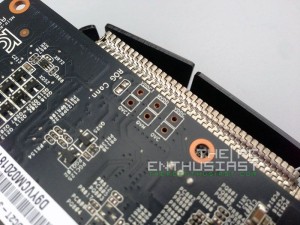 The card draws its power from a 6pin + 8 pin power connector, and consumes up to 300W of power. A 550W power supply is recommended to power this card. But if you are planning to install two R9 280X in CrossFireX configuration, you will need to have at least a 750W power supply.

Just like in the Asus GTX770-DC2OC-2GD5 there are also holes near the DiGi+ VRM chip, where you can hot wire it to get accurate readings, GPU’s memory, voltage , PLL voltage and do some volt modding. Usually you won’t need this, that’s why it’s not highlighted as one of its main features. 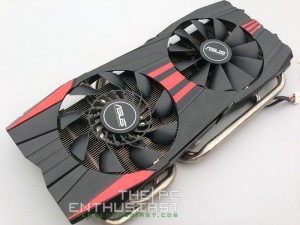 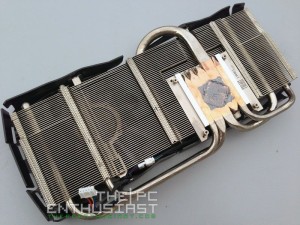 The photos above show the award winning Asus DirectCU II cooler. The top cover is made of metal, while in some lower models Asus use hard plastic. Behind the cover reveals the large heatsink with 5 heat pipes spreading the heat to the aluminum fins. If you look closely at the picture, you will see that only three heatpipes has a direct contact with the Tahiti chip, but that’s not a problem at all, since the cooler performs fantastic overall. 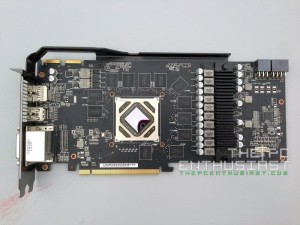 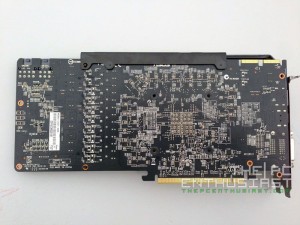 The photos above are the front and back PCB of the Asus Radeon R9 280X DirectCU II TOP 3GB. This card has two CrossFire fingers, meaning you can put up to 4 of these in CrossFireX configuration for the maximum performance. 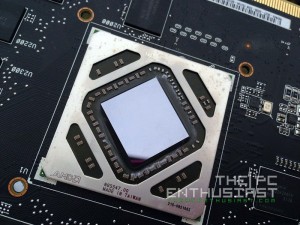 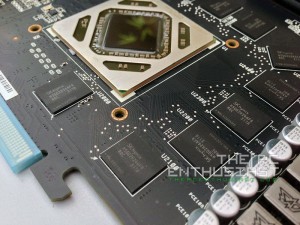 The photos above shows a closer look of the heart of the R9 280X, the 28nm Tahiti chip. It features CGN shader architecture, and 4.32 billion transistors. Beside the GPU, is a photo of the GDDR5 memory manufactured by SK Hynix. These memory chips run on 1,500MHz with an effective speed of 6,000MHz. 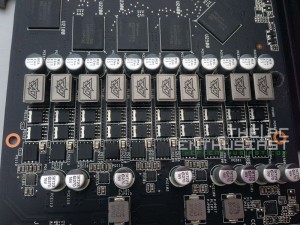 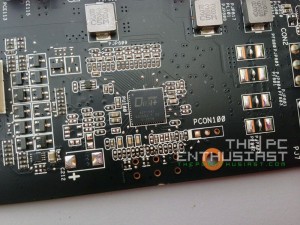 The on the left shows a closer look at the Super Alloy Chokes, MOS and high grade capacitors. The photo on the right side is the DiGi+ VRM which controls the voltage of the graphics card.

The Asus R9280X-DC2T-3GD5 comes with a factory overclock settings, but during my test, I was able to push further the clock speeds of the card giving more boost to the card’s performance. I’ve also added more game titles compared to my previous reviews. Below are the following components I used to test the card. Once again, thank you Asus for providing components for this test.

Aside from the components mentioned above, I used the driver version ATIUMDAG 13.251.0.0 (Catalyst 13.12) for Windows 7 and 8 64 bit. I used TechPowerUp’s GPU-Z to monitor the graphics card’s settings, and I used Asus GPU-Tweak to monitor its temperature and to overclock the card. In monitoring the frame rates, I used FRAPS to get the minimum, maximum and average frames per seconds.

For the synthetic benchmarks, I used 3DMark 11, 3DMark Firestrike (Extreme), Unigine Engine Heaven Benchmark and Final Fantasy XIV: A Real Reborn. Whereas for the game benchmarks I used several games, a combination of not-so-demanding games to graphics extensive games like Crysis 3.

All test or games are set in their highest possible settings at a fixed resolution. In my entire tests I used 1920×1080 display resolution. I didn’t have the chance to test it at a higher resolution or in multiple display settings since I was limited with the monitor I currently have.

Below is a snapshot of the overclock settings. I pushed the GPU clock to 1220MHz, GPU Voltage to 1288 mV, memory clock to 6548MHz, target power to 120%, and fan speed to 100%. This was the highest stable I could get. I was able to push it further to 1230MHz but the system became unstable. 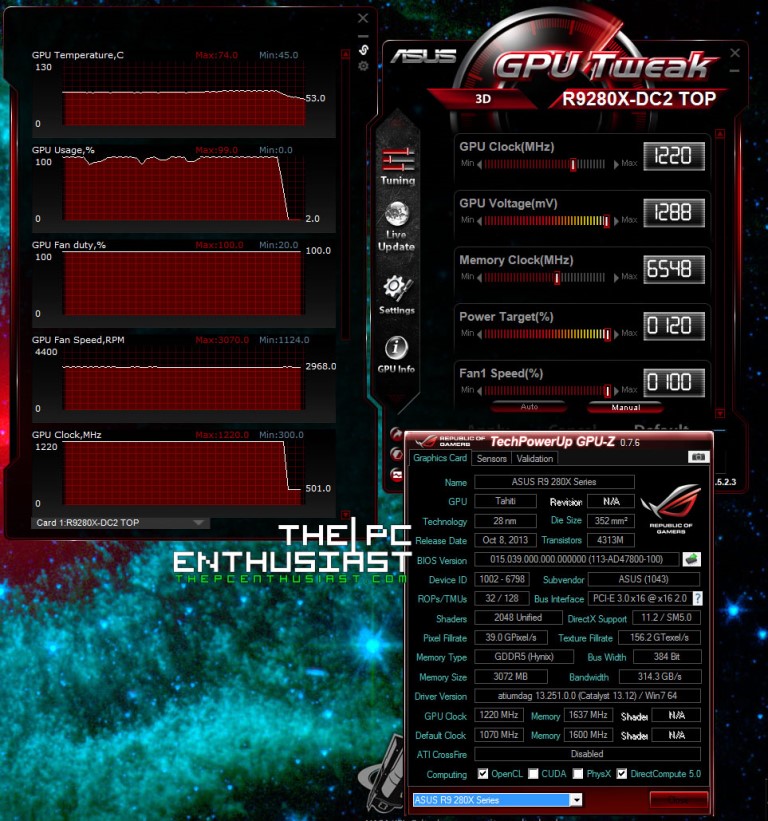 With regards to the fan noise, it ran quiet under normal load, and even at 1070MHz full load. Setting the fans to run at 100% speed, it tends to become noisy. The DirectCU II cooler also worked great, keeping temperature as low as possible. At idle, temperatures are around 35 to 39 degree Celsius. Meanwhile, even in overclock settings, the maximum temperature was only 74 degrees Celsius. But the fan was in 100% rotational speed. If we set the fan to auto, more or less the fan would have adjusted to a similar speed to cope up with the temperature.

Below are the benchmarks results for the synthetic tests: 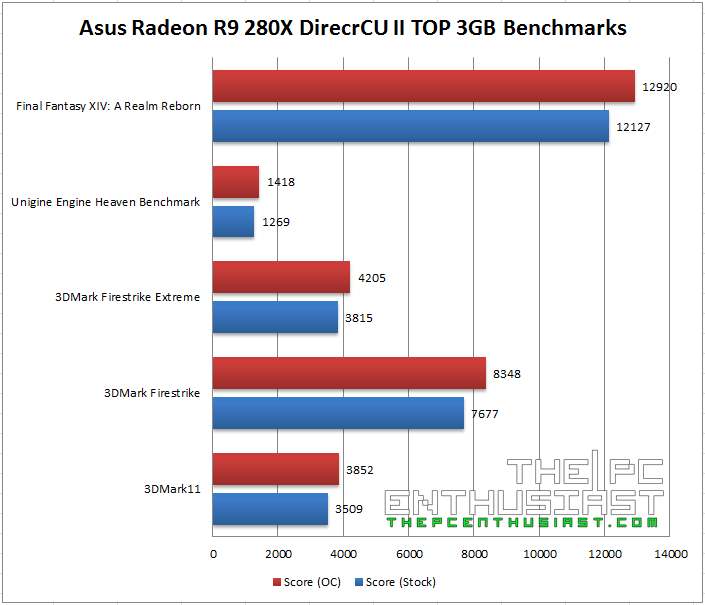 As you can see, overclocking the Asus Radeon R9 280X DirectCU II TOP improved the performance a tad better. But let me remind you that the stock settings of the Asus R9 280X are already overclocked settings compared to the reference R9 280X. So if I had the chance to test a reference AMD R9 280X, the performance difference, when compared to the overclocked Asus R9 280X, would have been significant already. 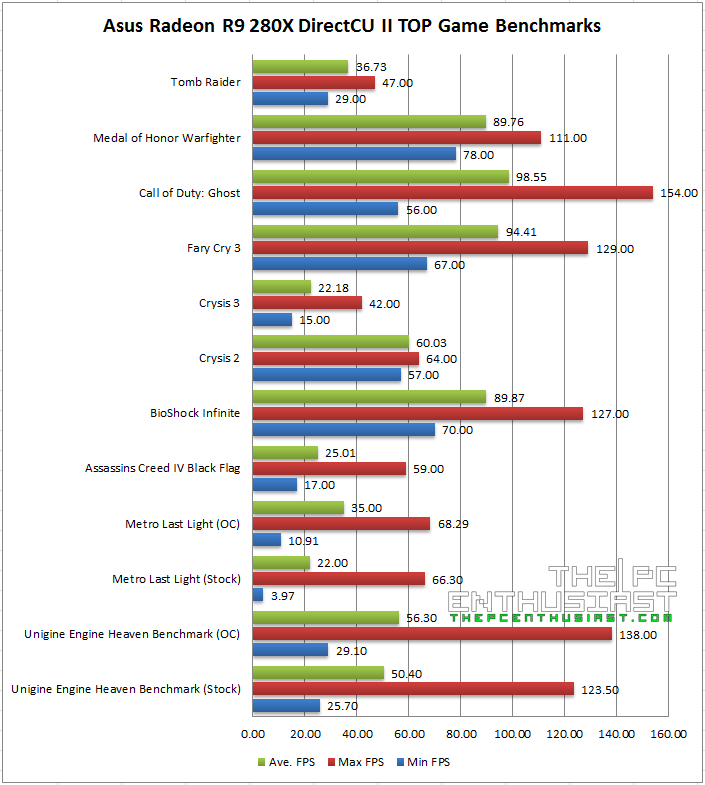 Above are the frames per second I got while testing the card. Just a note though, the last two item for Unigine Engine Heaven Benchmark are not game benchmarks. I only included the results in the above table since it was also in frames per second.

The FPS I got might not be the best specially for graphics intensive games. Remember, these games are running at the highest graphics settings possible at 1920×1080 resolution. Pushing the resolution higher, specially in multiple displays or in 4K resolution will definitely lower the frames per second. But overall, the gaming experience was great.

The Asus Radeon R9 280X DirectCU II TOP variant is widely available locally. Currently the cheapest I could find is priced at Php 18,330. Your local store might have it priced higher or lower. I’m not sure if we are also affected by the price hike cause by BitCoin miners here. But the price here is higher than the manufacturer’s suggested retail price of $309.99. This could probably be due to import taxes.

Anyway, if you are outside Philippines, Newegg’s price for this card is $389.99, but Amazon is selling one, for a lower price of $379.99 with free shipping.

Leaving the price hike behind, the Asus Radeon R9 280X DirectCU II TOP, overall, is a fantastic card. It’s goes on par with the GeForce GTX 770, and it is obviously faster than the GTX 760. Honestly, if not for the insane price increase of the R9 280X graphics card, not to mentions it’s always out of stock, it will have the GTX 770 a run for it. And although it is just a rebrand of the old HD 7970, many gamers (specially AMD fan boys) will find this card to be very attractive.

The Asus Radeon R9 280X DirectCU II TOP is even better compared to the reference R9 280X, in the sense that it features DirectCU II cooler which is very effective when cooling the card even in overclock settings. It also features Super Alloy Power and DiGi+ VRM, that not only will help you overclock the card easily, but it will also help maintain the overall stability and life of the graphics card.

Overall, I like the Asus Radeon R9 280X DirectCU II TOP, if not only for the insanely high price today, this would be a steal. I’m not sure if in other regions prices are high as well. But for now, this card deserves Whatswithjeff’s Highly Recommended award based on the original $309.99 SRP. 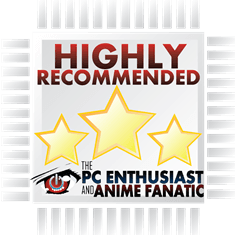