ASUS Republic of Gamers (ROG) today showcased at Computex 2014 its new line-up of gaming gear, each and every product crafted with the epic power and beauty demanded by the world’s best gamers. 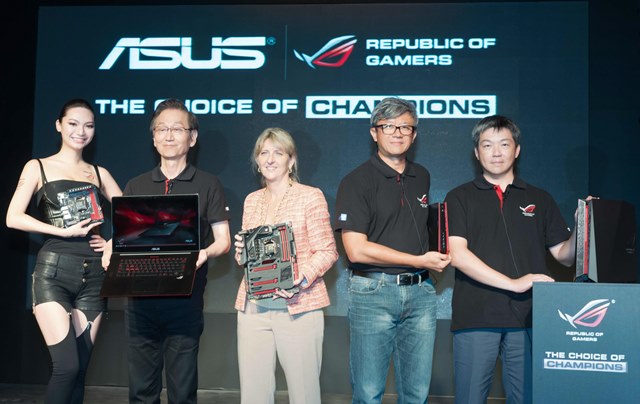 The awesome gears on display have been created by ROG for champions in pursuit of portability, power and extreme performance. The portable and powerful gaming products include the G20 desktop designed to dominate small-form-factor gaming, the market-redefining GR8 that delivers PC gaming power in console form, the ultra-thin, ultra-cool GX500 gaming notebook, the Gladius gaming mouse with epic ergonomics and the GK2000 keyboard, which employs mechanical switches for high tactility and superb responsiveness. 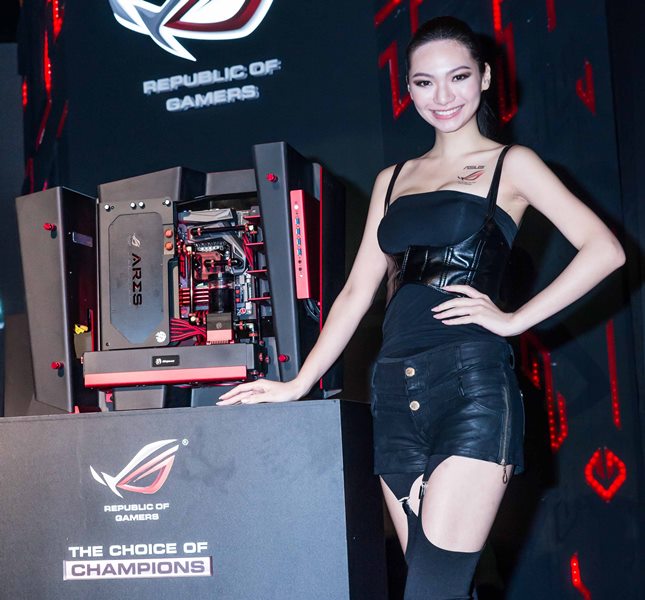 Commenting on ROG’s Computex 2014 presentation, ASUS Chairman Jonney Shih said: “Performance is what we live and breathe for! And aesthetics is about creating a sense of pride and belonging, way beyond the use of lines and colors. We take it upon ourselves to transform your desires and imagination into myriad products that are both beautiful and powerful — to deliver the most epic gaming experience. This time, we aim to break all the boundaries that confines hard-core gaming into any designated space.”

Created for champions in pursuit of portability and power

The Asus ROG G20 is designed to dominate the field of small-form-factor gaming desktops, and has already received the exclusive Best Choice of the Year Award and Best Choice Golden Award at Computex. The G20 features a compact 12.5-liter case that houses an Intel Core™ i7 processor and an NVIDIA® GeForce® GTX™ 780 graphics card for unstoppable HD-gaming performance and entertainment. 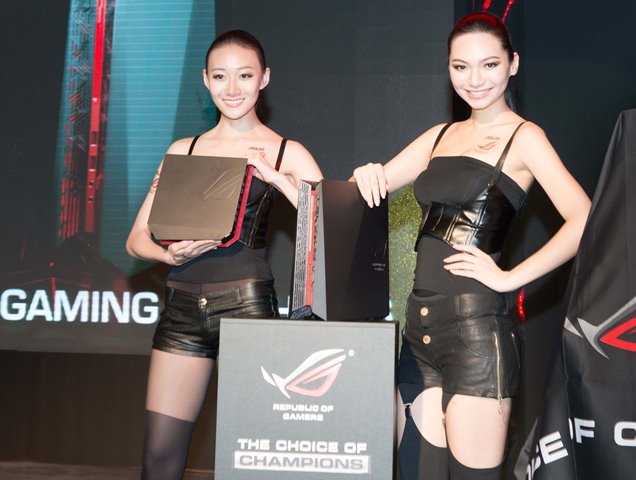 G20 is as energy-efficient as it is powerful. In Eco Energy Mode, it requires only 20W — delivering energy savings 50% better than the industry average. It also features the ASUS-exclusive Aegis application for monitoring system performance through a gamer-friendly user interface. 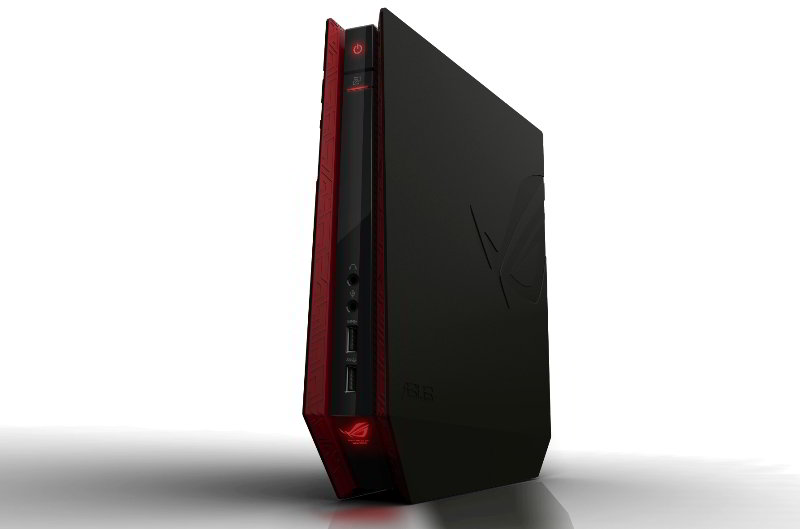 The Asus ROG GR8 is full-on PC gaming with high style and fantastic convenience. With an Intel Core i7 processor and NVIDIA GeForce GTX 750Ti graphics, GR8 packs immense PC power into sleek console dimensions for gaming experiences that push far beyond your expectations. From the outstanding SupremeFX audio output to 4K/UHD graphics and no-lag Gigabit Ethernet networking, along with a design allowing easy upgrades of storage devices and memory, GR8 is hardcoded for gaming. The slimline design is as at home in the living room as it is in a bedroom, and occupies hardly any space. It also has a built-in Miracast™ receiver, allowing HD content from supported Android smartphones and tablets, Windows 8.1 PCs and WiDi 3.5+ devices to be streamed straight to the big screen. 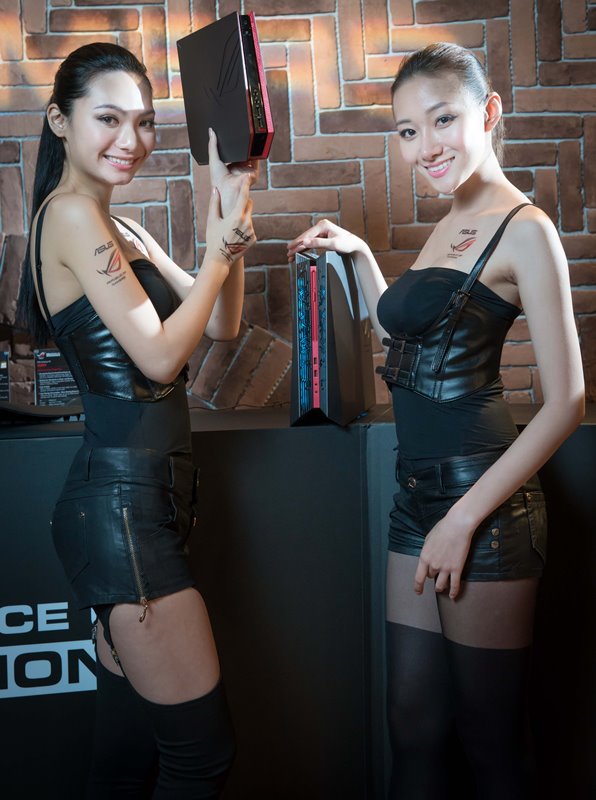 The first GR8 runs Windows 8.1 and is fully compatible with SteamOS and the Steam Controller. A SteamOS-powered ROG GR8 will be launched at a later date, in alignment with Valve’s Steam Machine schedule. 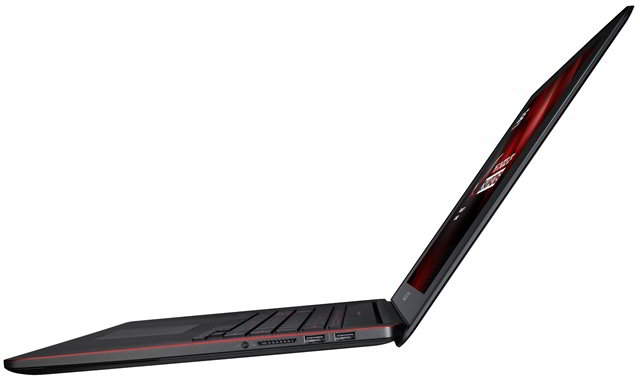 The Asus GX500 is ROG’s new ultra-thin, ultra-cool notebook that offers gaming power to go. Just 19mm thick — the thinnest in the 15.6-inch gaming notebook class — and 2.2kg in weight, GX500 packs specifications far beyond its size, with the latest Intel Core i7 processor and NVIDIA GeForce GTX 860M graphics. It also boasts a 4K/UHD (ultra-high-definition) 3840 x 2160-pixel display with exclusive VisualMaster technology that provides an incredibly wide color gamut of 100% NTSC, a world-first on a notebook. Gaming on the go has never looked this sharp. GX500 is also equipped with intelligent dual-fan cooling system for exceptionally-efficient and effective cooling. 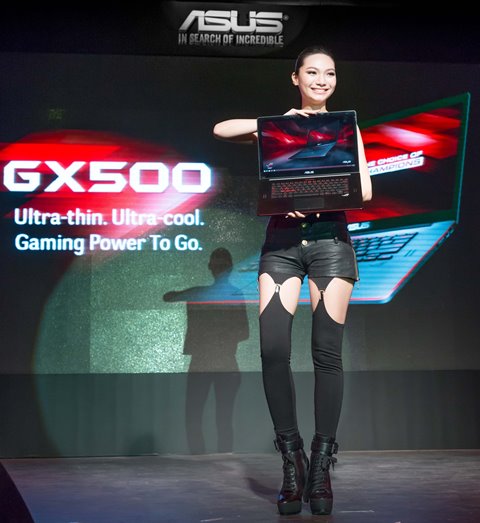 The Asus GK2000 allows users to customize almost all keys, and multiple actions can be applied to each one, meaning even complex sequences can be enacted with one touch. Built-in anti-ghosting technology ensures that every key press counts.GK2000 also looks as great as it commands, with premium metal accents and ROG-red backlighting with five eye-catching effects. 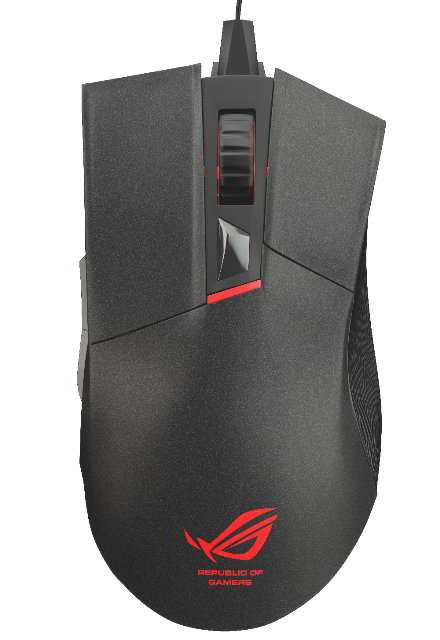 The Asus ROG Gladius is an optical wired mouse that’s engineered for first-person-shooter games and shaped by the needs of the world’s finest gamers, who demand advanced ergonomics, precision control and fast, flexible customization.

Gladius is designed to fit the right hand perfectly and is manufactured with smooth-touch materials that stay cool in the hand, while high-quality, Mayan-patterned rubber ensures a secure grip. A fingertip DPI switch, all-programmable buttons, including two side-mounted switches, complete the epic ergonomics and impressive functionality. Gladius has a 6400dpi optical sensor capable of tracking at up to 200 inches per second and 50G acceleration. It is even customizable, with an exclusive socket design that lets users slot in new or favorite switches to set their ideal click resistance, plus the unique detachable cable design allows gamers to remove the connecting cable for tidier transport. 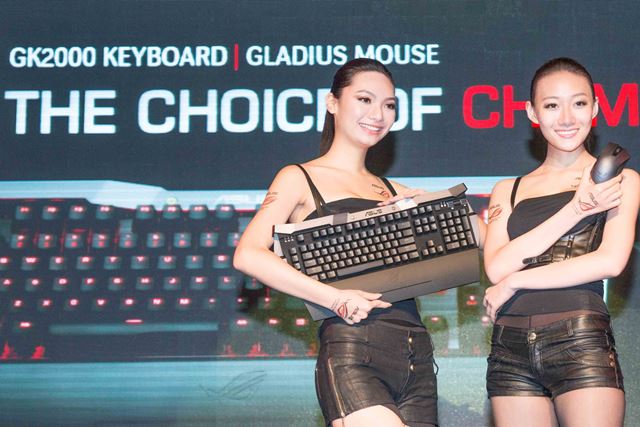 Engineered for Champions in Pursuit of Extreme Performance 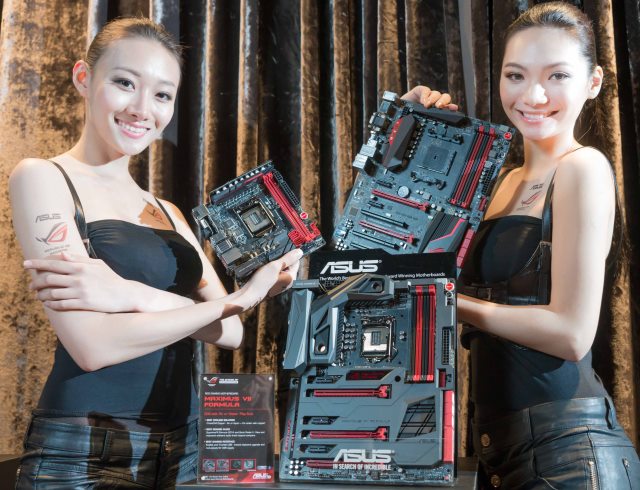 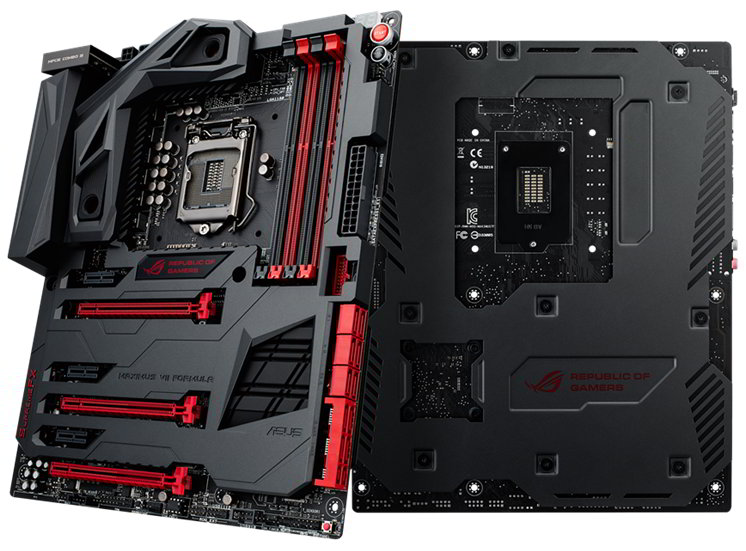 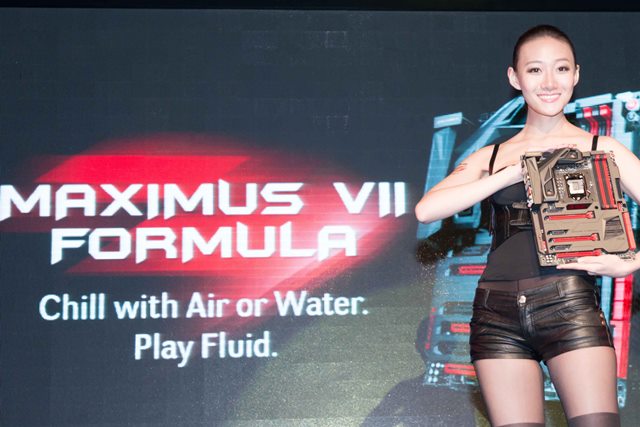 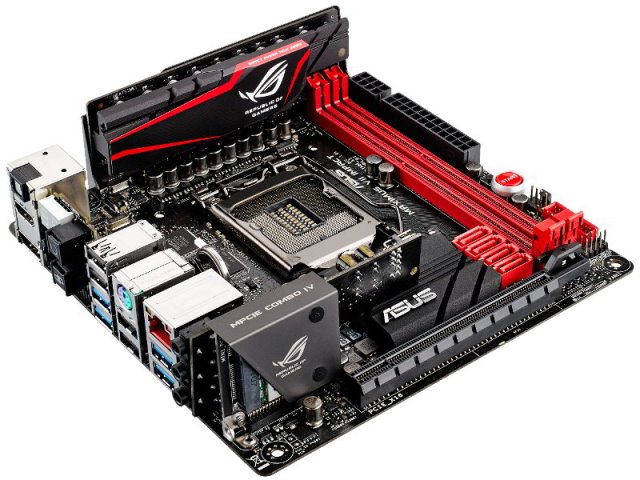 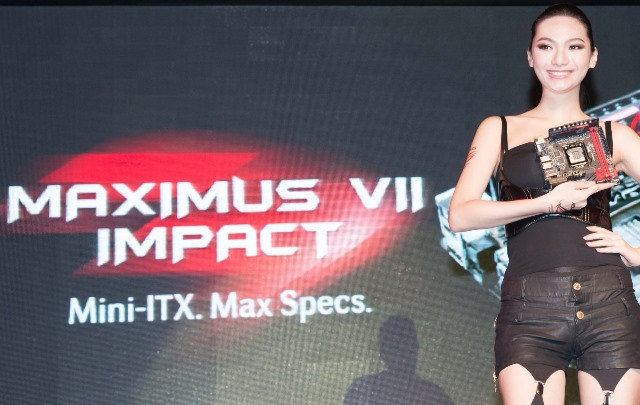 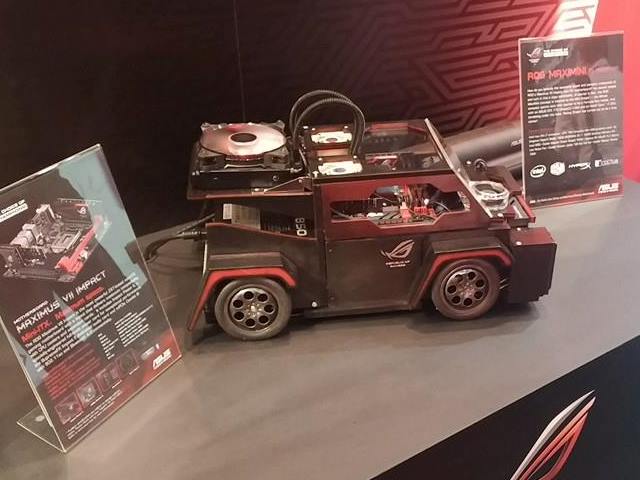 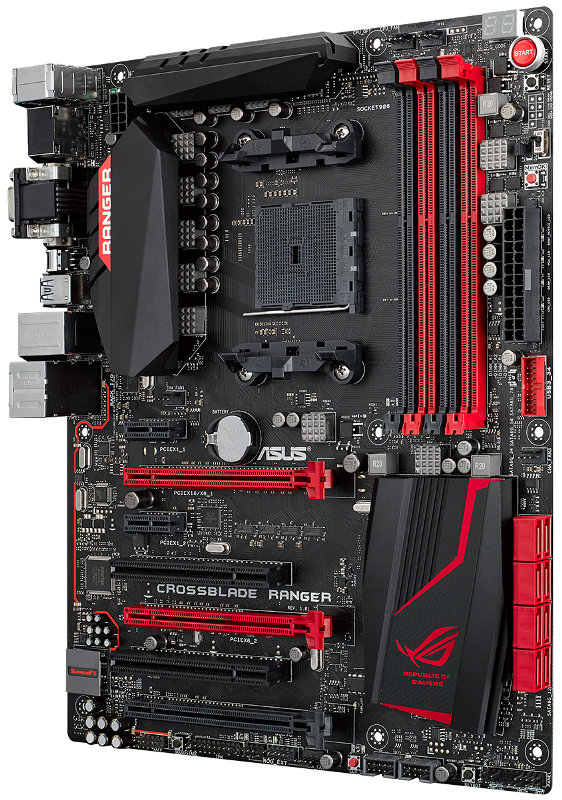 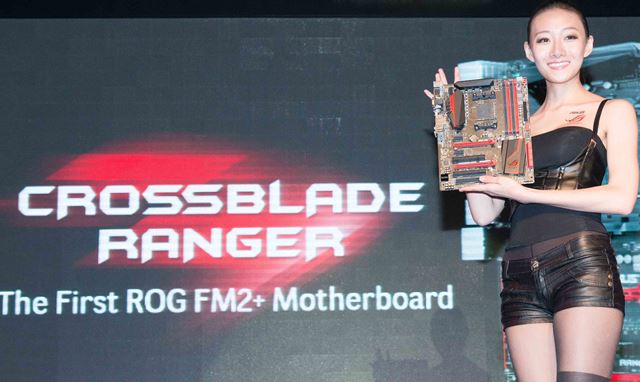 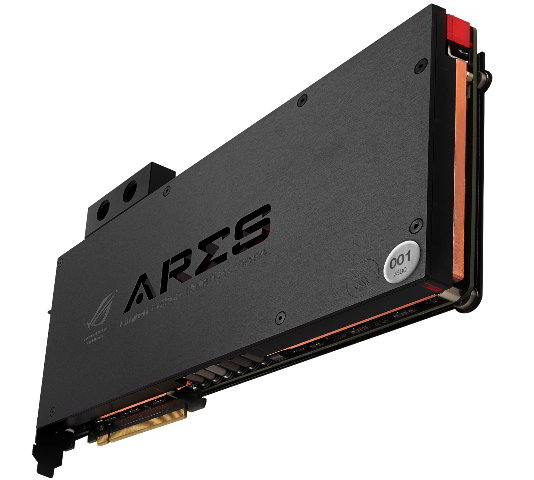 ROG exhibited the limited-edition Ares III, the world’s fastest gaming graphics card powered by hand-chosen dual Radeon™ Hawaii XT GPUs, water-cooled to deliver 25%-cooler performance than reference R9 295X, and supported by 8GB of super-fast GDDR5 memory. The Ares III showcases exquisite craftsmanship and this can be seen in its sleek custom-designed EK water block and hand-carved details. Just 500 Ares III units will be manufactured, and each will be numbered individually, reflecting its collectible status. 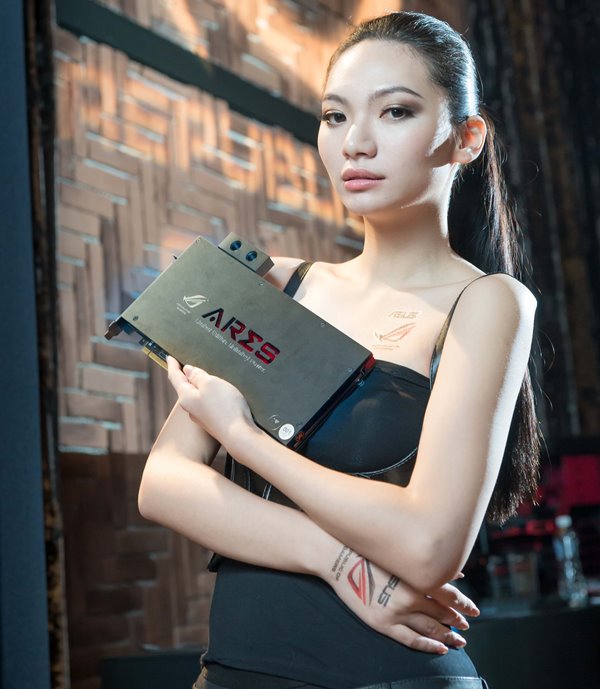 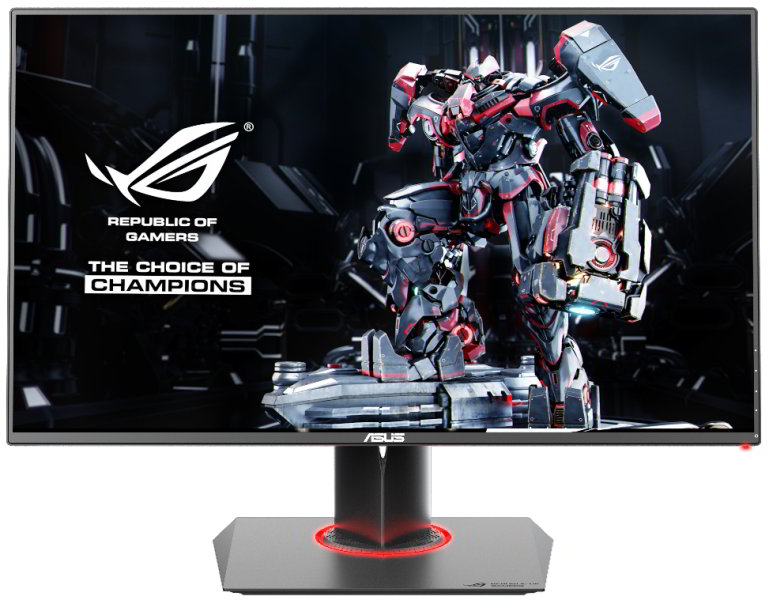 The Asus ROG Swift PG278Q is a stunning premium 27-inch gaming monitor that is the first and fastest in the world to support NVIDIA G-SYNC™ technology for stunning smoothness, and crisp 2560 × 1440-pixel (WQHD) resolution visuals. 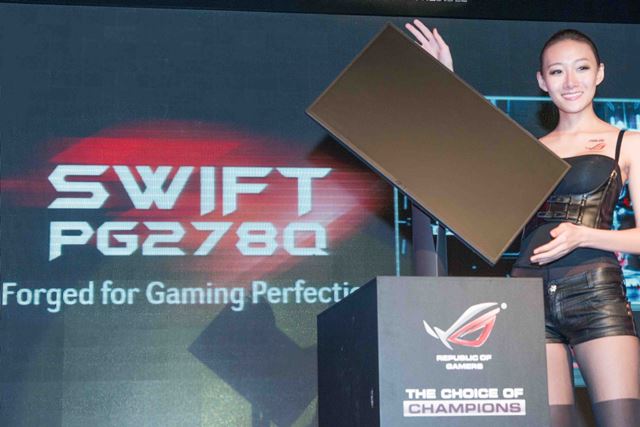 ROG Swift PG278Q is able to synchronize with the GPU’s render rate to provide stunning smoothness and ultra-fast response — for incredible images today and ready for the next generation of gaming. Tearing, graphics stutter and latency are a thing of the past, and a smooth visual experience is ensured by a rapid refresh rate of 144Hz and a fast 1ms response time. An exclusive dedicated Turbo key allows the user to select refresh rates of 60Hz, 120Hz or 144Hz with just one click, removing the need to faff with on-screen display (OSD) settings.