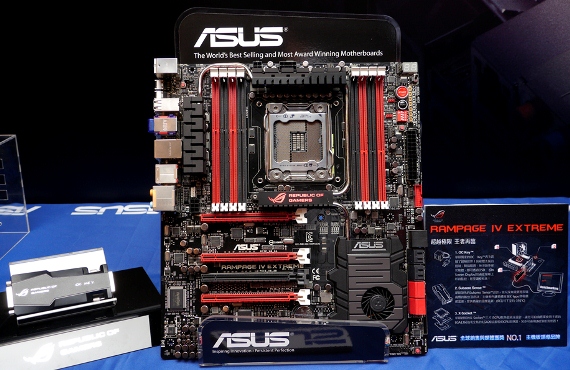 The Asus ROG Rampage IV Extreme is designed for extreme gaming and extreme overclocking. This board offers new features that you will not see in its predecessors.

This board is pack with many great and awesome features, I don’t even know where to start. Anyway, let’s focus on the highlight of this board. 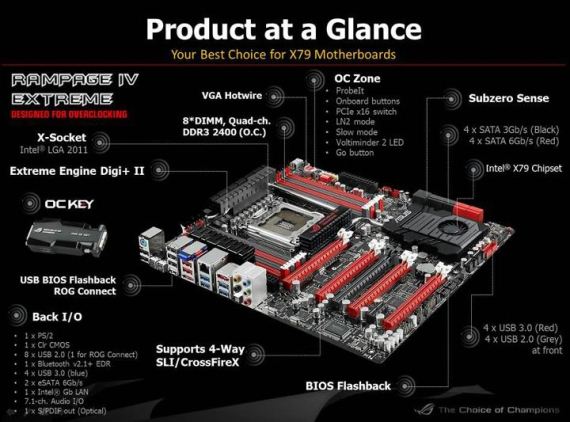 This new motherboard features a new socket called X-socket or the Intel LGA2011 socket. One great thing about the X-Socket is that you can change the socket mounting from socket 2011 to socket 1366 and vice verse. If you have a CPU cooler or a water block for socket 1366, you can still use it in this motherboard by simply changing the socket mounting from 2011 to 1366. The backplate is removable and interchangeable. 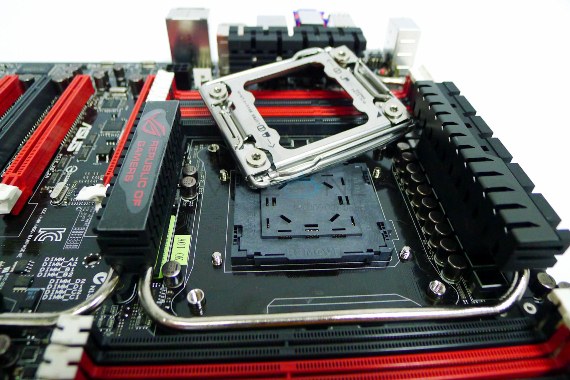 As you can see, the Rampage IV Extreme has a properly design cooling system to cool the VRMs, chipset and NB/SB of the board. The X79 chipset has a small fan integrated to the heatsink which will also cool the VRM because they are all connected through heatpipes.

This board is also built with the Subzero Sense which will give you information about the temperature of the CPU and GPU. With Rampage IV Extreme, you can literally “hotwire” your graphics card with the VGA Hotwire feature. With this feature you can overvolt your graphics card easily. This board comes with a new accessory called OC Key. The OC Key generates a graphical display overlay on the monitor which is connected to this device. With this you can adjust overclock settings in real-time without the need for additional hardware or software.

The Rampage IV Extreme features a strong digital PWM circuitry that supports heavy voltage overclocking with Vdroop control. The chokes installed in this board is rated up to 50A.

Although Rampage IV Extreme will not be bundled with Supreme FX or Creative X-Fi soundcard, instead the audio will be handled by Realtek ALC989 8+2 channel HDA codec. 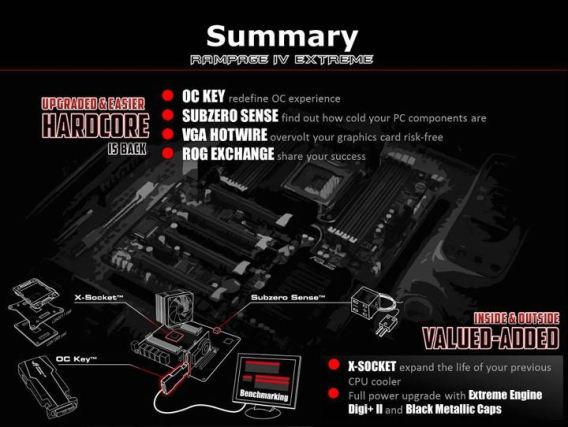 Honestly I am impressed. The Asus ROG Rampage IV Extreme is a monster board. It looks great and powerful. This board has everything you need to push your processor and graphics card to it’s very limit. Oh by the way, this board is bundled with a full game, Battlefield 3 special edition. 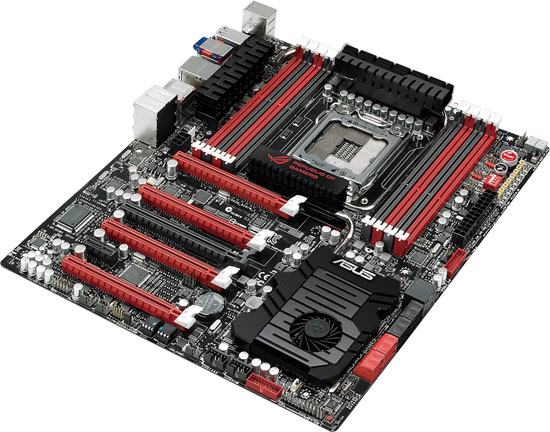 As of the moment, I don’t have information regarding the ROG Rampage IV Extreme’s price and when will it be available on online and local stores. But the Intel Core i7-3930K and Intel-3960X are already available.