Asus has finally released official information regarding their first line up for the upcoming black socket AM3+. This will be the Asus M5A series lineup from mainstream to high-end (flagship) motherboards. 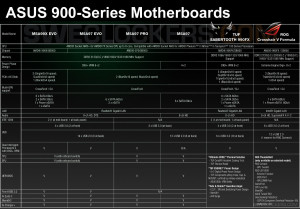 The M5A series will be based on AMD 970-990FX and SB950 chipsets. All of these motherboards will support the latest AMD FX series processors up to 8-core and is compatible with AM3 processors such as Sempron 100 series, Anthlon II and Phenom II.

Asus has already included the Republic of Gamers (ROG) Crosshair V Formula and The Ultimate Force (TUF) Sabertooth in this lineup for the gamers and enthusiast alike. Basically, people from average users up to enthusiast level can already enjoy Asus’ first wave of socket AM3+ motherboards.

The lineup will start with the entry level motherboards namely M5A97, M5A97 PRO and M5A97 EVO which are based on the AMD 970/SB950 chipsets. Next will be their mainstream entry which is the M5A99X EVO which is based in AMD 990FX/SB950 chipset. This features two PCI-Express 2.0 x16 slots that runs at x16 (single card) or x8/x8 (SLI/CrossfireX mode) and a third black x4 slot, a total of three PCI-Express slot.

Finally the lineup ends with two high-end, enthusiast/gamer level motherboards, the Asus ROG Crosshair V Formula and Asus TUF Sabertooth 990FX. Like the M5A99X EVO, this two high-end motherboards are also based on the AMD 990FX/SB950 chipset. Each of these monster mobo has it’s own features that are unique to one each of them. It’s like they have their own “weapons of gaming”.

The TUF Sabertooth 990FX has the following unique features:

While the ROG Crosshair V Formula has the following unique features:

Like the Asus M5A99X Evo, all of the M5A lineup will be available sometime around June 2011. So AMD lovers be prepared.