ASUS has recently launched its ‘Join In The Gold Rush’ competition, inviting PC enthusiasts from around the world to get creative by crafting stylish custom builds. Contestants are encouraged to create a blinged-out build based around the ASUS gold motherboards from October 1, 2013 to November 11, 2013. Contestants will have more than 1 month to build their system. Participants must upload photos of their system via the competition website here. 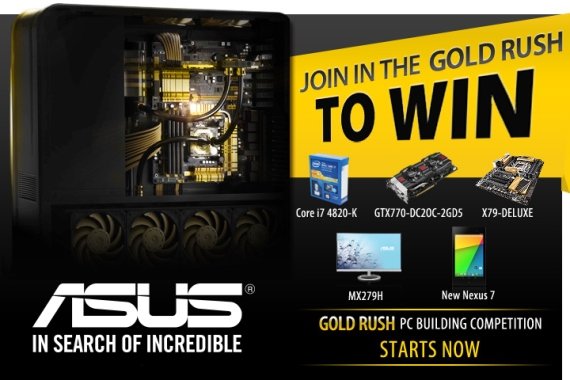 The public, senior ASUS staff and respected members of the modding community will all get the chance to vote for their favorite builds. Both entrants and the voting public will have chance to win some fantastic prizes, via weekly prize draws and the final judging process. The first place prize is an X79-Deluxe motherboard, GTX 770 graphics card and an Intel Core i7 processor. Once the 600th entry is received, an additional prize draw will be held — with one lucky winner walking away with the new Google Nexus 7 tablet, built by ASUS.

The Asus ‘Join In The Gold Rush’ competition is designed to promote creative ways to use beautiful ASUS gold-themed motherboards, with Intel® X79, Z87, H87, Q87, B85, H81 and AMD FM2+ Series products being the starting points for eligible entries.

There are no limitations on what entrants can build or how they should express their color-matching creativity. Tiny or tower, water-cooled or systems built from scratch — scratch mods — are all welcome. ASUS encourages entrants to color-match components as much as possible, perhaps by employing pretty pipework or fitting lights that flash to match the rest of the build’s hues — the choice is theirs. Entrants might even choose to included color-matched peripherals in their entries, or paint their computer dens to allow everything to bask in the golden glory.

From 12 November 2013 to 25 November 2013, the public will be invited to judge all ‘Join In The Gold Rush’ competition entries and vote for their favorite creative builds. The 10 favorite builds, as chosen by the voting public, will then advance to the final judging stage — to be appraised by a panel of ASUS stuff and industry experts.

The first-place winner will receive an ASUS X79-Deluxe motherboard, a Asus GTX 770-DC2OC-2GD5 graphics card and the latest Intel Core i7-4820K processor. The second-placed contestants will each receive an ASUS VivoPC, VivoMouse and a Designo MX279H monitor, while the two in third place will each win an ASUS GTX770-DC2OC-2GD5 graphics card. Prize draws held weekly during the entry period mean that all contestants have the chance of winning. Weekly prizes include an ASUS RT-N16 Wireless-N300 router, a ROG Orion Pro gaming headset and a Xonar U7 USB sound card.

A final prize draw will be held to award prizes to public voters. Five names will be drawn at random, with each lucky winner receiving an ASUS gold-themed motherboard.

Full terms and conditions for the Asus ‘Join In The Gold Rush’ competition can be found on ASUS website. The judges’ decision is final and no correspondence will be entered into.

The ASUS ‘Join In The Gold Rush’ competition will be run from October 1, 2013 to November 28, 2013 in the Philippines. The closing date for entries is November 11, 2013. Please contact your local ASUS representative for further information.