SM is having a Trade To Upgrade promotion for the Belkin N600DB and N750DB Dual Band Routers. You can get 30% discount on Belkin N750DB or Belkin N600DB router when you trade in your old router. However this promotion is available in all participating SM dealers only. Promo period runs from June 1 to June 17, 2012. 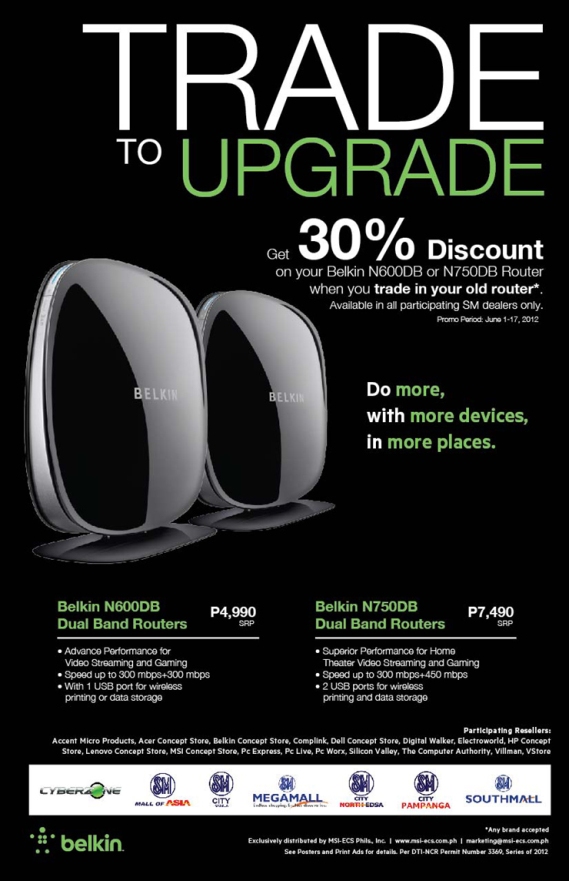 The Belkin N600DB and N750DB are Dual Band routers that support both 2.4GHz and 5GHz bands. Now why shift to a Belkin Dual Band Router? If in your area, there are many persons who are connected in your local network to surf the net, play online games, stream videos, download stuff, smartphones, tablets and etc, then a dual band routers is needed.

Most of the routers supports only 2.4GHz bands, and the 2.4GHz band is susceptible to interference from cordless phones, alarm system, microwaves, bluetooth resulting to unclean and interrupted frequency or reception. On the other hand the 5GHz channel is cleaner and provides less interference as it offers anywhere from 8 to 23 non-overlapping channels as compared to 2.4GHz where you only have 3 channels that can be used simultaneously without any overlap. In short, 5GHz provides significantly improved performance making it ideal for gaming and streaming.

Belkin routers use multiple wireless antennas to transmit and receive digital data in simultaneous radio streams for increased range and throughput. The result? More power and more speed for all your online activities.

The Belkin N600DB Dual Band Router features advance performance for video streaming and gaming, capable of speed of up to 300 mbps+300 mbps, and has 1 USB port for wireless printing or data storage.

The Belkin N750DB Dual Band Router, on the other hand, has a higher capability featuring superior performance for home theater video streaming and gaming, capable of speed of up to 300mbps+450mbps, and has 2 USB ports for wireless printing and data storage.