Powerful performance with a new processor and OS
The new BlackBerry Torch 9860 is powered by a 1.2GHz QC 8655 processor and runs in BlackBerry 7 OS (not to be confused with Windows phone 7). Surfing, playing games, watching movies and doing other task is executed smoothly with the 1.2GHz processor. Multitasking is achievable with ease. This is not the first smartphone to have a 1.2GHz processor. But it’s one of the features that I am considering in a smartphone. 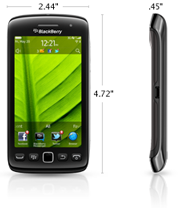 Dimension and Size
The Blackberry Torch 9860 weighs 135 grams or 4.76 oz. Not too light but not too heavy. Just enough for me. It has a height of 120mm, a width of 62mm and a thickness of just 11.5mm. It’s not the slimmest out there; it’s not too thick either. It has just the right thickness to fit most of our palms.

Great Display
BlackBerry Torch 9860 comes in a 3.7 inch screen size with a resolution of 800×480 pixel. The screen used is Transmissive TFT LCD with 253 ppi and 24-bit display. A not too impressive feature, but good enough.

High Resolution Camera for capturing photos and videos
The BlackBerry Torch 9860 is built with a 5 megapixel camera with flash and image stabilization. It can record 720p HD videos, has continuous auto focus, can do geo-tagging and has zero shutter lag (great for taking pictures continuously).

Enough Storage Capacity
The BB Torch 9860 has 768MB of RAM memory and has an internal 4GB eMMC capacity. Storage capacity can be expanded up to 32GB through microSD memory card.

Easy to use and navigate
The new BlackBerry 9860 is the first to have a 3.7 inch touch screen, making it the largest to date. It features the All-touch-screen that the previous BlackBerry smartphones doesn’t have. It features on-screen keyboard that supports portrait SureType®, QWERTY and multitap, landscape QWERTY; dedicated keys like Send, End (Power), Menu, Escape, Camera (User customizable), Volume Up/Down (Fwd/Rwd for media, Zoom for camera), Mute (Play/Pause for media) and Lock.

RIM’s BlackBerry Torch 9860 will soon be available in the succeeding months.