Bleach 519 is now available! . We saw a lot of things during the previous chapter, and it revealed to us that we will be seeing some of the characters during the previous arcs like the Fullbringers, Shiba Ganju, Grimmjow and more. It also revealed some more details about Ichigo’s real identity which I will discuss below. Find out more on Bleach chapter 519. 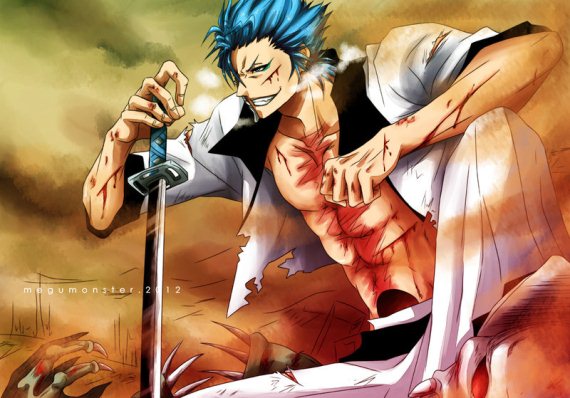 In the previous chapter, the Zero Division was able to retrieve the injured characters, including Ichigo and Tensa Zangetsu. Their mission, to bring them the Palace of the King of Souls. Before Ichigo left Soul Society, Urahara was able to reach or contact Ichigo via Kon. Urahara is currently in Hueco Mundo, I don’t know what’s he up to but Inoue and Sado is with him, plus another special someone who’s face was not revealed. Ichigo was shock to hear his voice and asked Urahara why is “he” with them. If this was an Anime, we could easily guess who was it, unfortunately it’s Manga. Can you guess who is it? My guess is…

Prediction: That could no other than, Grimmjow Jaggerjack!

Next, they went to Shiba Kukaku’s place. Can you still remember Shiba’s launching pad? From there, they will launch to the palace. What a hectic way to travel if you ask me. But as Kukaku launched them, she said something about “Uncle”. Who could she be referring to as her uncle? Did she mean like a “relative uncle” or was she referring to someone older than her. Sometimes in Anime they call a person older than them “Oji-san” literally means uncle.

Prediction: Kukaku could be referring to Isshin as the uncle. If Kukaku meant that Isshin is her relative, could this mean that Ichigo and Kukaku could somehow be related? Could they be cousins?

The new Ganju was also revealed and we saw three fullbringers from his background. If I am not mistaken they were Kugo Ginjo, Giriko Kutsuzawa and Shukuro Tsukishima.

Things are really getting exciting as the Bleach final arc is reaching is final episode. Slowly, we see previous characters being revealed. This gives us an idea that these characters will participate in the final battle against the Quincy/Vandereich. This also gives us an idea that the final battle will be something really big. Bigger than any war happened in Bleach.