Bleach 524 is now available!. Last chapter, we saw Ichigo and Renji being attacked by the Asauchi. Will they be able to answer Nimaiya’s question whether who is on top? We also saw the beginning of the battle of the greatest onslaught. A battle between two Kenpachi, strongest of the Shinigamis. Will Unohana die after their battle? All of these, we will learn the answer on Bleach chapter 524.

UPDATE: Check out my Bleach 524 review.
UPDATE: Bleach chapter 524 is now available. This chapter is entitle “The Drop”. “A fierce attack coming down”. The battle between Captain Unohana and Zaraki Kenpachi. 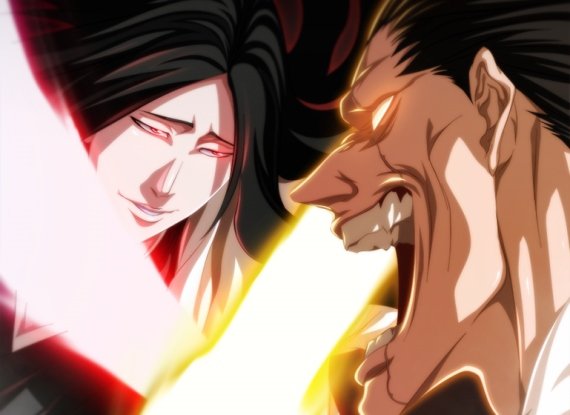 The strongest Zanpakuto, create by Nimaiya. These zanpakuto were used by low ranking Shinigami, who can’t properly use their sword. Who can’t even hear their voices and just look at them as a tool.

The Asauchi are angry to the Shinigamis because they were treated like a tool, an inferior being compared to their wielder. Nimaiya talks funny but he is pointing out something to Ichigo and Renji. And I think I know what it is.

Nimaiya asked them who is on top, Shinigami or the Zanpakutou. But the answer could be nobody. The Shnigami and Zanpakutou are equal. Nobody is above the other. The Shinigami and the Zanpakuto should be one, and should not look at one another as a tool or something with ranks or level.

That’s why the Asauchi were angry. I think they were neglected and thrown by their old users. It’s a classic plot in an anime series. If you have watched lots of anime or read tons of manga, you will definitely encounter a similar situation.

I’m pretty sure Ichigo will be able to figure it out, since he was able to become one with Zangetsu already. More or less he has an idea already.

Now, beneath SS, a deadly battle is about to begin between two vicious killers. Two Kenpachi will be fighting, the one trying to teach the other, while the other trying to learn how to fight.

Zeraki’s throbbing wound is his right eye, while Unohana’s throbbing would can be found on her chest. BTW, Unohana’s looks was somewhat different, if you have noticed. The sweet innocent healer look was gone. All I see is a vicious killer, silent but deadly. Very much eager to slash and cut somebody.

Captain Commander Kyouraku said that in the process of training Zaraki the art of killing, one of them has to die. Obviously, if someone will die, it will be Unohana. Since there’s no point in teaching Zaraki is he is going to die in the end, right?

Oh no! If what Kyouraku predicted is true, Kubo is going to kill another major character – Captain Unohana. Let’s just hope nobody has to die in the greatest onslaught between the two Kenpachis. SS needs not only Zaraki, but Unohana as well.

Anyway, Bleach 524 spoiler will be posted in this section, if ever raw scans or leaked spoilers will be released. Until then, stay tune for updates. I’ll update this post once Bleach 524 chapter is released or when spoilers became available.

By the way, please support Bleach Manga by buying the original volumes once it became available in your region.