Bleach 562 – Renji The Villain vs The Super Star Hero

At last reinforcement has arrived. Renji and Rukia were the first one to arrive, I’m sure Ichigo will be the last one to arrive, saving the best for the last. Renji the badass “Villain” has come to Rose and Kensei’s aid, after Super Star Hero badly defeated them. Bleach fans, you don’t want to miss the chapter starting here and the succeeding chapters. The heroes.. err the “villains” has return and they have to come kick some Vandenreichs’ butts. 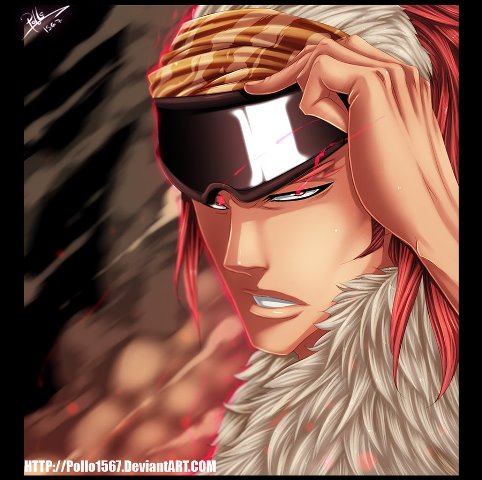 The Super Star was able to defeat Kensei and Rose, two Captains of the Gotei 13 squad. I was somewhat disappointed because they were easily defeated. As if they were caught off guard. And what’s with Rose’s Bankai then he was suddenly defeated with one blow. Now he has a Star hole in his chest. I’m not sure if Kensei is still alive or not, but I think he is. Rose is barely alive after suffering from a fatal blow.

The Super Star Hero doesn’t have his loyal fan anymore to cheer for him, but is still already pumped up. I’m not even sure if Renji will have a hard time defeating this guy. I hope won’t have a hard time since he is not really that strong compared to the higher level Sternritters.

I’m eager to see the results of Renji and Rukia’s training. I’m sure they might have develop some new tricks or powers. They even look different now, and I’m sure their Zanpakuto is way stronger than it was before since they found their real Zanpakuto. I’m guessing that Renji could defeat this Super Star without even using his Bankai. But let’s just wait and see. Perhaps Renji wants to do some overkill damage and decides to use Bankai on him.

What do you think guys? Haven’t talk about Bleach manga in a while. So hit the comment section below and share your thoughts.

Bleach 562 spoilers aren’t available right now, and I’m not even sure if they will be. But it is expected that Bleach 562 will be released by Wednesday. So stay tuned