Recently I read somewhere in the anime forums that Bleach Hell Chapter Movie 4 will be released today, August 24. And true enough I found a Raw Bleach The Movie 4 – The Hell Verse. In my post last year regarding Bleach Movie 4 Hell Chapter Official Trailer, this movie was released on Japan’s theaters last December 4, 2010. 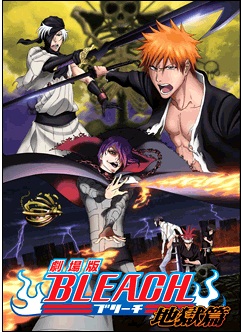 Bleach fans were expecting that Bleach Jigoku Hen would be released soon on DVD’s or Fan-subs as early as January or February. Unfortunately it was not, until now. Jigoku Hen is reported to have 100 minutes of running time.

To give you a little background of Bleach Hell Chapter or Hell Verse or Jigoku Hen, whatever you feed like calling it, here’s a summary of the story. 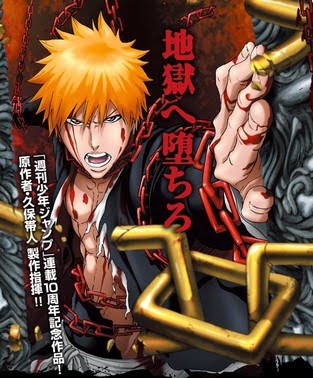 Bleach Hell Chapter is the fourth movie of the popular anime, Bleach. The gate of Hell suddenly appeared in Karakura Town. Unforgiven spirits called Togabito, led by Shuren, escaped from Hell. Rukia and Renji was sent to investigate. Ichigo’s family were being targeted by the Togabito.

Yuzu was captured by the Togabito. A “friendly” Togabito named Kokuto convinced Ichigo and the rest of the Shinigami to go to Hell and save Yuzu. In this movie, Ichigo’s hollowfied form spontaneously manifest and slowly consumes Ichigo. We will witness Ichigo in his full hallowfied form. Well Don’t want to continue any further. Just watch the movie for yourself.

I’m sure any moment from now a Bleach Hell Chapter English Sub will be released. Can’t wait until then! Bleach Jigoku Hen could be an epic movie. I’m not so sure yet. I just have a feeling. ^_^