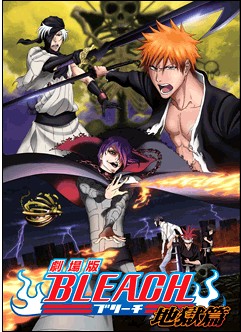 A little background of the movie first: Bleach Hell Chapter, is the 4th movie of Bleach and will be aired in Japan theaters this coming Saturday (December 4, 2010). The movie will be set in Hell and will feature a fully Hollowfied Ichigo. Kubo has stated that he has been involved from the planning and scenario stage. The Movie centers around Ichigo and his friends heading into Hell with the assistance of man named Kokutoo to stop the merging of the two realms. However, Kokutoo gives Ichigo a warning – he mustn’t Hollowfy in Hell, or he will lose control of his body and never be able to return…


Here is a trailer I found for Bleach Movie 4 Hell Chapter:


You may also visit the Bleach Movie 4 Official website and trailer here http://www.tv-tokyo.co.jp/bleach/ for more information. It’s a Japanese site though.