A lot of my readers are asking me how they can build a budget gaming computer this 2013. There are basically lots of ways on how you can build your own gaming PC. But if you are in a budget, you have to choose which PC components you have to buy carefully so that you can get most out of the budget that you have. In this article, I’ll show you how to build a cheap gaming PC that would fit your budget. Pleas continue reading below. 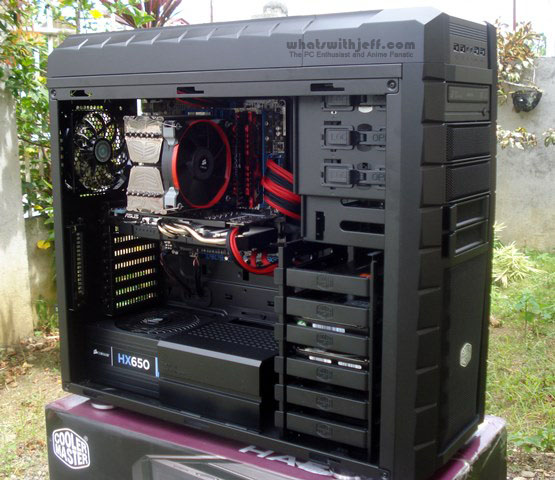 Note: The Gaming PC that I build, is definitely not a $500 Gaming Rig. It’s just for reference only.

I can’t also tell you that you should get this or that, because we have our own preferences. So if I were in your position, I’ll show you how I will build my budget gaming computer. But first, let us define our budget first, and the parts that are covered in this budget.

Let’s say I only have Php 20,000 for a CPU, that’s around $500 USD. Now this budget is allotted for the CPU alone – processor, motherboard, memory, video card, hard drive, PSU, and the casing. These are the core components of a computer. I will not include the monitor, keyboard and mouse because there are just tons of them and it really doesn’t affect or contribute to the performance of your computer. Below I’ll show you two setup, an Intel Budget gaming setup and an AMD budget gaming setup. Let’s also assume that you will be using a Windows 32bit system which is capable of only detecting 3.2GB of RAM.

If you can expand your budget a little more, here are some added suggestions:

See also: How Much Memory Do I Need for my PC

There you go, if I have Php 20,000 or around $500, the above list is the PC components that I am going to buy and assemble. You might be asking how about if you are on a really tight budget, around 15k, can you still build a gaming rig?

For 15K or $375, you might be able to build a gaming computer but it’s a very tight budget. You might not be able build a decent gaming computer that produces decent FPS for you to enjoy your game. Specially if you are planning to play games like Call of Duty Modern Warfare or Far Cry 3, or Battlefield 3 / 4. But if you are planning to play Warcraft III or DOTA, the above list is capable of playing the game.

It’s not impossible, if you can find some second hand parts that are still in good condition then you are in luck. Or you can build a brand new one but just invest more on the processor and graphics card, plus a 2GB and less on the other parts.

Intel vs AMD Setup For Gaming

This question has been around since the time AMD and Intel begun to create processors. There is no one answer to this question either, whether an Intel system is best for gaming or an AMD setup. Both systems and processors have their own advantages and disadvantages. But generally AMD processors are cheaper compared to their Intel counter part. However, mainstream and higher-end Intel processor, although more expensive than an AMD processor, can offer you better performance. This is more of a personal preference and budget preference.

Is a 2GB Graphics Card Faster than a 1GB Version?

Although this is not always true. In high end graphics cards, a 2GB version may produce additional performance. This is because the GPU itself or the graphics processor is fast enough to max out the 1GB memory buffer.

How Much Storage Space Do I Need For Gaming

When it comes to gaming, you don’t really need a 1TB hard drive. In fact a 250GB or better yet a 128GB SSD is enough. The drive’s capacity is not the priority here, the speed of the drive is what that matters when it comes to gaming. I wouldn’t suggest getting a “Green” drive, or drives with 5200 RPM or less, for gaming because it tends to be slow, as a result your game will take a longer time to load. I would suggest getting the mainstream WD Blue or Black (or equivalent 7200 RPM drives), or better yet get a Solid State Drive or a Velociraptor if you have a bigger budget.

Invest In A Certified Power Supply

I also suggest that you invest in a good PSU or power supply. Why? Because it is the one thing that gives power to your computer. It is also responsible, and will be your first defense against power surges, under volts and power fluctuations and other power interruptions. If you get a generic power supply and blows up, there is also a big possibility that it will also damage your other PC components as well.

A common mistake is that people tend to invest more on their graphics card, motherboard and processor. But they forgot or neglect to invest on a good power supply. Now if that PSU gives up, it may take the other PC components with it as well. Are you willing to rely your mainstream or high end gear to some cheapo PSU? DON’T!

If you are in a budget, don’t invest much on a case, it’s just a case and you can buy a better one later when you have the budget. The important parts in build a gaming PC are the Processor and Video Card. Both of these should be balanced to avoid bottleneck. Don’t pair a mainstream or high end graphics card with some entry level processor or dual core, and vice versa.

Hope this guide helps, if you like it please do consider sharing it with your friends. If you have any other questions, just hit the comment section below.