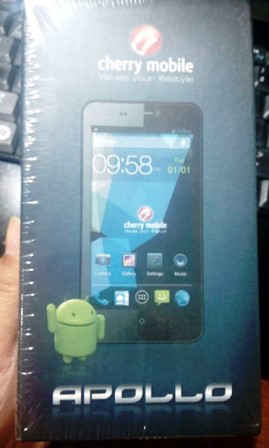 The Cherry Mobile Apollo is powered by a 1.2GHz quad core processor paired with a 1GB of RAM. Meanwhile graphics processing is handled by a PowerVR SGX544. But that doesn’t sound interesting enough since even an entry level Flare 2.0 has quad core processor.

Basically, the main feature/selling point of the Cherry Mobile Apollo is its 12 megapixel rear facing camera with Backside Illuminated sensor (BSI for short). The 12MP rear camera is paired with a 5 megapixel front facing camera. People seemed to prefer smartphones with BSI sensor these days, since they do take better quality pictures and videos compared to regular 8 megapixel camera without BSI sensors. Another good thing about the Cherry Mobile Apollo is the nice 4.5-inch 720p HD IPS display with a resolution of 1280×800. IPS displays are better than your typical low resolution display.

But the Cherry Mobile Apollo is not a perfect device. Since it is relatively cheap and affordable, there are some draw backs or down specs so that it would fit its price point. The CM Apollo has only 4GB of internal storage memory (very very low) and only a 1,800 mAh battery. Considering that this is powered by the quad core processor, expect that you will have to recharge the phone once or twice a day depending on your use.

The Cherry Mobile Apollo has a suggested retail price of only Php 6,990 only and is now available at Cherry Mobile kioks. But I’m not sure if it’s already rolled out nationwide or not.