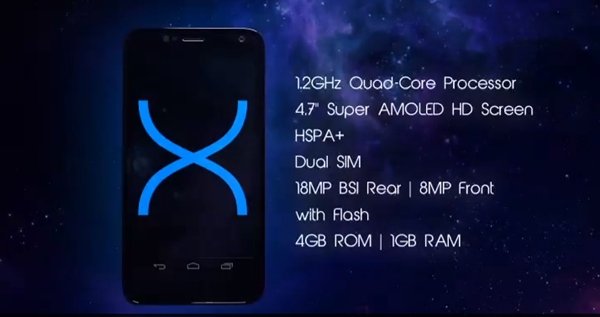 The Cherry Mobile Cosmos X is a Dual SIM Android smartphone powered by a 1.2GHz quad core processor with 1GB or RAM. It has a 4.7-inch Super AMOLED display at 1280×720 resolution and 312 pixel per inch density. The Super AMOLED display is one of the main features and selling point of the Cosmos series.

The CM Cosmos X runs on Android 4.2 Jelly Bean out of the box and has a PowerVR SGX544MP clock at 286MHz for its GPU. It has 4GB of internal storage and can be expanded up to 32GB via microSD. The Cherry Mobile Cosmos X features an 18 megapixel autofocus camera with BSI sensor and LED flash, and can record 1080p videos at 30 frames per second. The 18 megapixel rear facing camera is paired with an 8 megapixel front facing camera, also with BSI sensor.

Other than those, all are basics for a smartphone. The Cherry Mobile Cosmos X features Miracast Wireless Display technology, meaning it’s WiDi ready, enabling you to stream videos wirelessly. It has some basic connectivity options such as WiFi 802.11 b/g/n, Bluetooth 4.0, GPS, microUSB, 3G/HSPA+ network speed and 3.5mm audio jack. More details from the specifications table below.

The Cherry Mobile Cosmos X has a suggested retail price (SRP) of PHp 9,999 only, making it the cheapest Android phone from the Cosmos series. The Cosmos X is now available in Cherry Mobile Kiosk and in SM Cyberzone nationwide.

I understand that Cherry Mobile has downgraded some specs to cater the new features and keep the price as low as possible, but one or two mediocre to bad specs, can ruin your mobile experience.