After a short anticipation and wait, Cherry Mobile has recently launched their latest quad core flagship smartphone that competes with MyPhone A919i Duo and O Plus 8.15, the Cherry Mobile SkyFire 2.0. Although before the official unveiling, we already have an idea of what their next flagship phone would be. Will this be your next Android phone? See more details below. 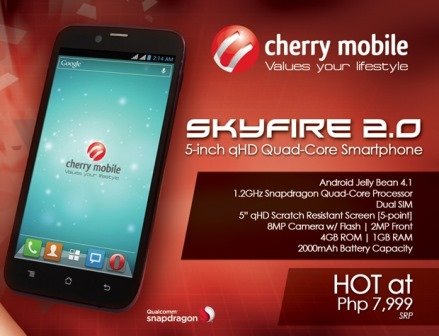 The Cherry Mobile SkyFire 2.0 sports a nice 5-inch qHD scratch resistant display with 960×540 resolution and 220ppi. It is powered by a 1.2GHz Qualcomm Snapdragon Cortex A5 quad core processor, similar to CM Flame 2.0, paired with Andreno 203 for its GPU and 1GB of RAM for its memory.

The CM SkyFire 2.0 has a 4GB internal storage, expandable up to 32GB via microSD, an 8 megapixel rear facing camera with flash, paired with a 2 megapixel front facing camera. It also has basic network and connectivity functions like WiFi, Bluetooth, 3G and GPS. The CM SkyFire 2.0 will be running on Android 4.1 Jelly Bean, not the latest Jelly Bean version but at least its Jelly Bean, and will be powered by a 2,000 mAh battery.

The Cherry Mobile SkyFire 2.0 is priced at Php 7,999, which I think is a very cheap price for a 5-inch, quad core powered Android smartphone. If you have checked the Cherry Mobile Omega HD before, you will noticed that it is priced similarly. The Omega HD might have some few advantages like 12 megapixel camera, better display, but it is only powered by a dual core processor.