Corsair has been known to deliver top of the line memory modules and PSU. And now Corsair has unleashed their best solid state disk, the Corsair Force GT SSD.

The best PC hardware developed and made by Corsair are marked with “GT” and usually has a touch of color Red. Like Corsair’s best memory module, the Dominator GT, the Corsair Force GT SSD is flaming Red! 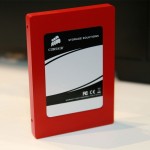 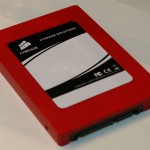 Force GT is included in Corsair 2.5″ SSD SATA 6 Gbps lineup. This new red hot SSD promises to give you a speed of 520MBps read speed and 500MBps write speed. This is made possible through its SandForce SF-2000 controller.

I can’t imagine how fast this SSD could go. I mean SSD of SATA 3 Gbps are already really fast, then this Force GT has to be twice even faster.

Corsair Force GT comes in with a 240GB storage capacity. There are no announcements yet regarding it’s price. But it will soon be available in our local stores.

Solid State Disk are going faster and bigger in storage capacity. And soon SSD might replace the standard HDD that we are using right now. I hope price would also go down. ^_^