A Case Fan is one essential component of a PC, specially if you are building a gaming PC. There are LED fans that, not only provide cooling solution, but also add to the looks and aesthetics of your unit. But LED fans tend to have a lower air flow and air pressure compared to non LED fans. Fortunately, Cougar’s CFD LED fan, that features a hydraulic-bearing, will prove that theory wrong. Today let’s take a look at the Cougar Dual-X CFD Blue LED 140mm case fan. 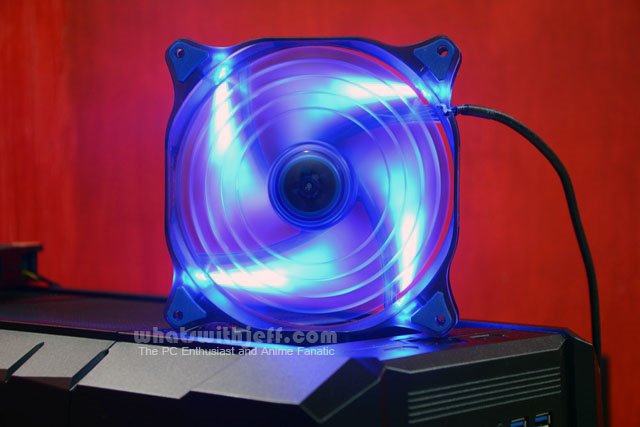 There is also a 120mm version of the Dual-X CFD fan. Even though the 120mm version is capable of delivering up to 1200 RPM, everything is similar with its bigger brother, except for the size (of course) and it has a slightly lower air pressure and air flow with 64.37 / 109.42 and 1.74 respectively.

Unlike your typical LED case fan, the Cougar Dual-X CFD features a dual-layer rigid blade design. This means that the fan blades doesn’t have a one smooth curve, but has two curves on the surface of each fan blades. There are a total of 9 blades, with a distinct four claw-like design, that generates more powerful air pressure and air flow, and reduces wind shear noise. 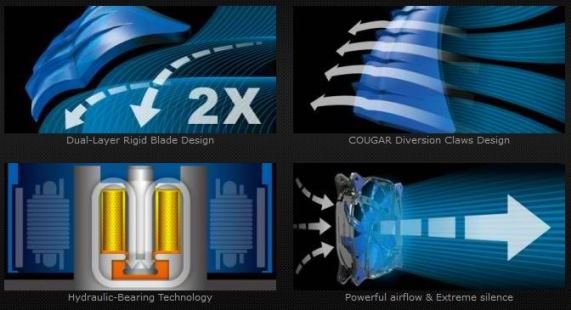 It’s built with a hydraulic bearing technology that is responsible for making this fan runs smoothly with no friction for a quieter operation. To lessen the noise caused by vibration, at its corner are four holes with anti-vibration pad. And instead of using screws, the Cougar Dual-X CFD includes rubber fixed pins that further reduces noise vibrations and makes it a tool-free case fan. This is one feature that system builders and PC enthusiasts are looking for in a case fan.

The 9 translucent fan blades feature an innovative Cougar diversion claw design. Not only that it is an eye candy and adds to the overall looks of the fan, but it also provide focused air flow and reduce noise air turbulence. And finally the four LEDs in the corner that adds to the visual looks of the fan. 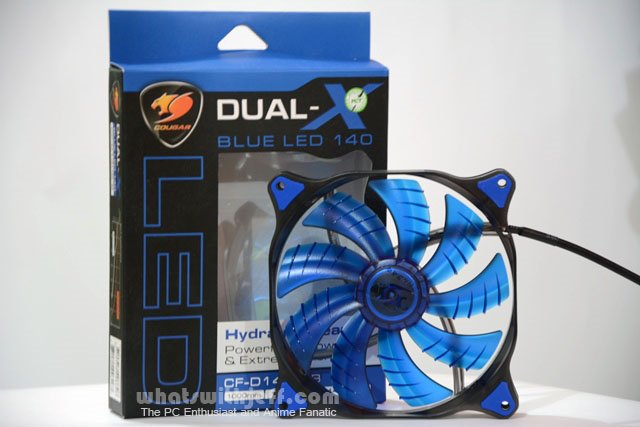 When I first opened and saw the fan, I was pretty much impressed with the design. It looks new, feels new and has a design unlike any other 140mm fans. The whole Cougar Dual-X CFD has a translucent frame and blades.

The Cougar Dual-X CFD has a thin black translucent frame. Despite its thinness, the frame is sturdy. You can also see the four rubber pads at the corner, where you insert the included rubber pins. There is no logo sticker in the center-front of the fan (only at the center-back), but there is an engraved Cougar logo.

The Cougar Dual-X CFD 140 LED fan has a sleeved 3-pin connector. There’s also a 3-pin to 4-pin adapter included. Although the connector is sleeved, I was quite disappointed with the type of sleeve they used. It’s just a synthetic braided covering, and not a real braided sleeve like PC enthusiasts used to cover the PSU cables and connectors. But at least the connector is sleeved.

Unfortunately I wasn’t able to test the Cougar Dual-X CFD as a fan for a CPU cooler or for cooling a 140mm radiator. The CPU cooler that I have can only mount a 120mm fan, and I don’t have a water cooling setup. 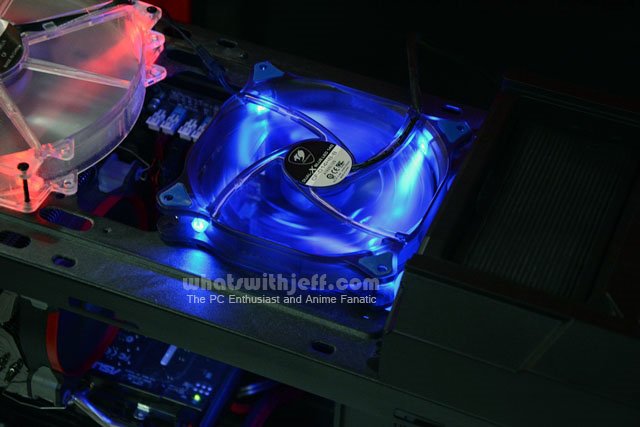 But I was able to use the fan as an intake and exhaust fan, and installed it on my Cooler Master HAF XM mid tower gaming case. Although I don’t have the exact figure, I did notice a drop in the temperature of my PC, specially when in gaming.

I just wish I got two or four Cougar Dual-X CFD 140mm LED fans to test, see the results and appreciate the visual effects. A single 140mm LED fan installed in a HAF XM mid tower chassis (that features a semi full tower internals) looks odd and is not enough to cool down the whole system. 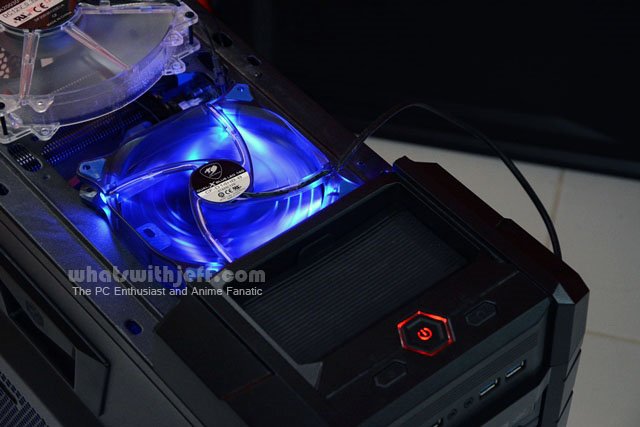 Testing a case fan is a bit tricky. Why? Because there are lots of variables included. Most of the time temperature readings vary from one user experience to another. If you read other case fan reviews, you will notice that there is no one similar temperature readings. The room temperature, the case of your system, the components installed, and how you install the fan all affects the readings.

What is important is you get a cheaper alternative that can compete with other premium case fans in terms of performance. I’m not really a fan of LED fans, and if I ever do use a LED fan, I prefer it to be minimalistic like the Cooler Master SickleFlow. But comparing the Cougar Dual-X CFD 140mm LED fans with other LED fans, whether stock or premium LED fans, I say this is one LED fan that you need to consider when building your system or when planning your PC’s cooling system. 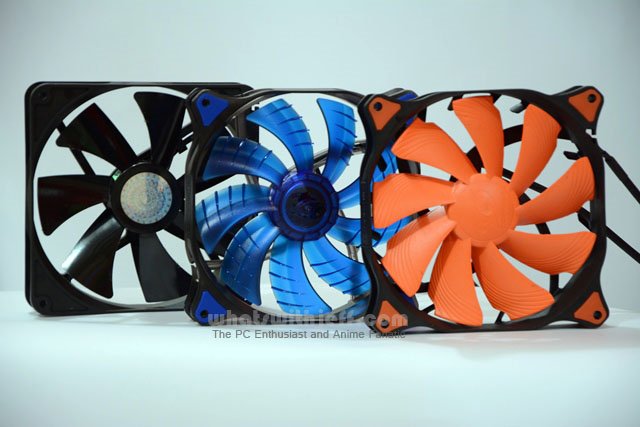 The Cougar Dual-X CFD LED 140mm fan has a reasonable price tag, and lower compared to other premium case fans. It’s around $19.95 to $24.95 USD with free shipping when you order here or here. Locally, it’s around Php 600 more or less. Prices are subject to change without notice.