Crysis 2 Be the Weapon Revealed

Crysis 2: Be the Weapon is just around the corner and will be released very soon. It is set to be released on March 22, 2011. Crysis 2 will be one of the big games that you will be expecting next year (2011). Develop by the Crytek and published by Electronic Arts, Crysis 2 will be available on Xbox360, Microsoft Windows and Playstation 3. Crysis 2 will be using the CryEngine 3.

New York City will be the new battlefield for Crysis 2. New terrifying aliens will invade the city. In Crysis 2, players will be able to enjoy the Nanosuit 2. Nanosuit 2 is the redesigned and improved version of the first Nanosuit. The suit is to feature many improvements over its predecessor, giving players freedom to upgrade their suits based on their own style of combat.

“It’s 2023, terrifying alien invaders stalk the New York City streets and a nightmare plague strikes down the city’s inhabitants with brutal epidemic speed. Neither paramilitary law enforcement nor the might of the US military machine can stand against the invaders. One man will inherit the means to survive. One supersoldier, wielding the combat enhancement technology of the future with Nanosuit 2, will make the last stand to save humanity from destruction in the urban jungle that is New York City.”

Key Features
• Nanosuit 2: Adapt your combat tactics by customising your Nanosuit and weapons in real time, unlocking a variety of supersoldier abilities.
• New York New York: Crysis set the visual benchmark for PC games that still stands today. Crysis 2 will redefine the benchmark on console and PC platforms, shifting their attention to the rich urban jungle of New York City. 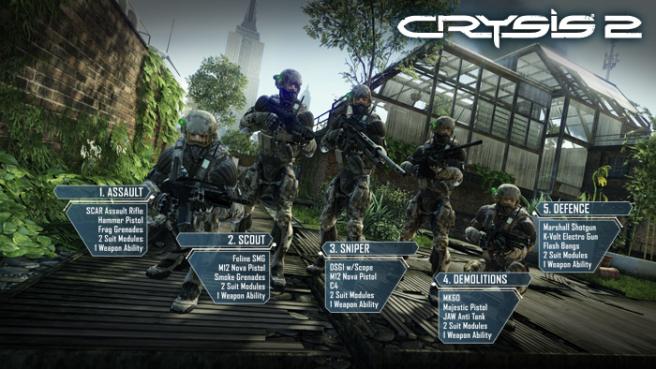 Hopefully we can download a free demo version of Crysis 2 and will be available soon. In the meantime watch trailers of Crysis 2: Be the Weapon below.