“The sound of bones crunching with each of his strikes mixed with something I could not quite believe: the monk was laughing as he fought. One by one, he dispatched his foes until only one remained.” 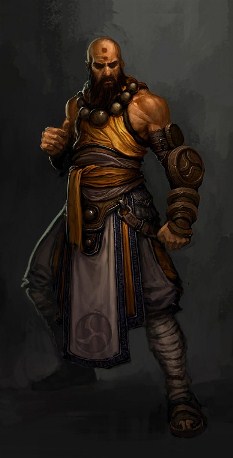 The Monk is also a new character in Diablo III. Unlike the Demon Hunter class, you can choose between a Male monk or a Female monk. Personally I like the female version of a monk. Although a “monk” is usually male.

The Monk uses his/her fist to fight demons. Some moves a monk can do are; Crippling Wave, Impenetrable Defense, Exploding Palm, Seven-Sided Strike and Way of the Hundred Fists. As you have read, it’s all about Fists. This Monk is more like a “Fist of Fury” type.

It’s seems that the Monk is the replacement of the Assassin from Diablo II Lord of Destruction. The Assassin, like the monk, also uses her fists to slay demons. 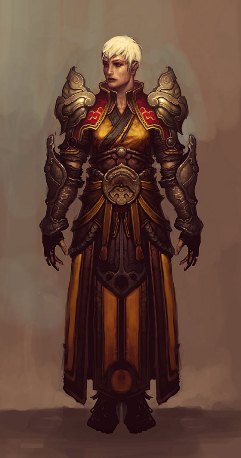 As I have observed, the female version of the monk is more heavily armored as compared to the male monk. See the reference image of a female monk on the left. Well it’s just a reference picture. And still it’s up to you how you dress up your character for battle.

Truly, Diablo III is an exciting game and many Diablo fans are already itching to slay demons in the new 3D environment.

More information of the Monk can be found in the Official Website.