A recent report came out that a Diablo III player earned $10,000 from Diablo III Real Money Auction House (RMAH). For those who are not familiar with RMAH, it’s a place where player can buy and sell items using real money. I could still remember during the Ragnarok days when people would sell their characters or items offline for real money. Well, Blizzard has integrated the idea to D3. 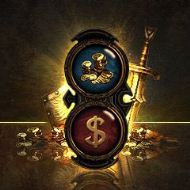 The player did not earn the $10K in just 1 month, in fact the period was from May 20, 2012 to August 2, 2012. His earnings ranged from $18 to $200+. He received all his earnings thru Paypal. I think I have an idea on how he made that amount of money. It’s not easy and it takes a lot of time and effort but I think it’s doable. But before that, below are the screen shots of his transactions from Reddit. 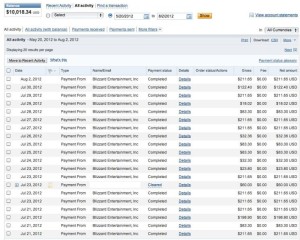 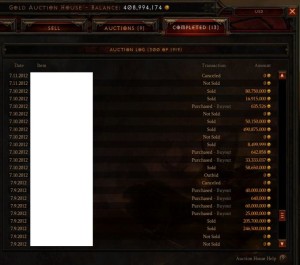 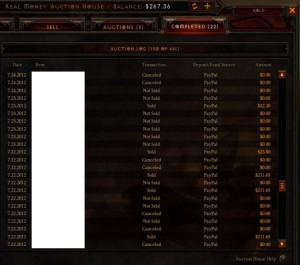 According to the guy: “I have never botted, scammed, used any of the number of exploits, or cheated in any way whatsoever. Before this game, I never made any money off of what I did because it was against the rules. Investing and trading in the item markets is part of how I have my fun, it wouldn’t make sense for me to cheat. Anyone who played D2 with hacks knows what I mean.”

Further, he said that during the first two months he was playing Diablo III for 8 hours a day, that’s like a full time job if you ask me. And sometimes he is having overtime up to 14 hours a day. But once he was able to set it all up, he mentioned that his playing time dropped. He just sometimes logged to repost auctions and do a quick 20 minute scan.

That’s a lot of work, but he was rewarded with $10K in just a few months. Not bad, not bad at all. Since he was already earning this amount of money, he also said that he would report it and pay the tax appropriate to his earnings.

I have tried playing 8 hours or more in one day but that was with Diablo 2, Final Fantasy X and Star Ocean. But now, I don’t play that much anymore since I have other obligations and things to do.

About the guide that I said earlier, I’m not really sure if he is using the same guide, but this is the only legitimate and working Diablo III RMAH guide I know. You can get that guide here.

You can try the guide for yourself and see if you can also earn the same amount like this lucky guy did. Anyway if the guide did not make you any money at all, you can ask for a refund within 60 days.