At last, the most popular runner type game, Temple Run gets a sequel. Temple Run 2 was officially launched by Imangi Studios, LLC for iOS just recently, and for Android users don’t worry because it’s going to be available by third week of January 2013. And just like the first release, TR 2 is also free. Thousand have already downloaded the iOS version and it’s expected to reach millions of download in no time, specially when the Android version is released. You can download Temple Run 2 free for Android and iOS below.

UPDATE 2: Disney has released a Wizard of OZ version of the game. Go here to Download Temple Run: Oz for Android and iPhone
UPDATE: TR2 for Android now available. Download the game below. 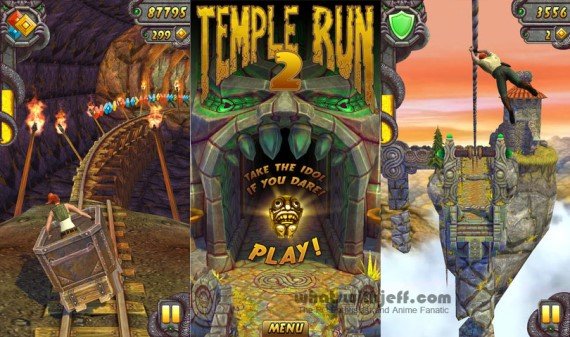 The game play is pretty much the same as the first release. However, there are some significant improvements in the graphics and environment in TR2. You will also be challenged with new obstacles, get to take advantage of more power-ups and try to get more achievements. Did I say anything about challenging obstacles? That’s right, This will really test your running skills and reflexes. The obstacles are more challenging and fun than before.

There are also different characters in TR2 you can play with. Each character has his/her own specific special powers which you can use while trying to navigate your way out the Temples. And the monkey got bigger too!

Don’t worry I’ll update this post immediately once the Android version is available, so be sure to bookmark this page and come back soon. It should be available by January 24. Stay tuned!

P.S. I know there are some sites claiming that you can download Temple Run 2 for Android or PC right now. But I think they are fake. They will tell you to Like the page, share and do all sorts of stuff then gives you the download link. But later you find out the it’s not the real one (or probably contains virus). So just be patient, .