Erza vs Kagura: Who Do You Think Will Win?

UPDATE: Erza is still the strongest and Kagura admits her defeat. Unfortunately, the evil Minerva stabbed her from behind. Not only Kagura lost, but Erza also lost the points to Minerva. 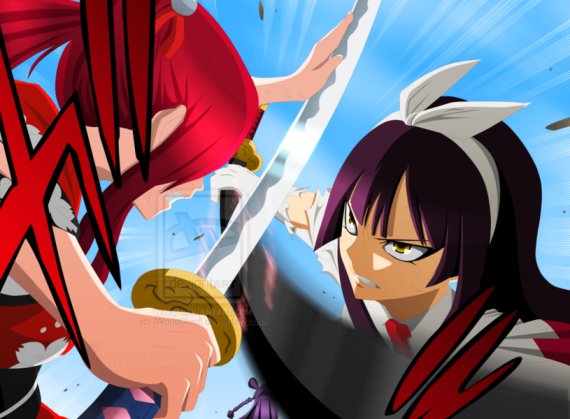 This article “Erza vs Kagura” is a review of Fairy Tail chapter 314, also the title of the chapter. If you had read Fairy Tail 314 already, you’ll agree that it was an epic chapter. A battle between two great sword magician. But how come Kagura was able to out power Erza easily? Is she really stronger than Erza?

In my opinion, both of them are powerful sword-type mages. Erza and Kagura, without a doubt, is even stronger than Minerva. Minerva is not that strong, she just use dirty tricks and unfair tactics to gain advantage or win in a battle. But Erza and Kagura are pure power.

After reading the chapter, I still think Erza is stronger than Kagura. But how come Erza is loosing? Perhaps Erza is letting her emotions on her way. And at the same time Kagura is blinded with hatred and anger towards Jellal (the one who killed her brother – Simon) and partially, at what had happened to Milliana.

Kagura was very determined to finish Erza, fight Minerva and save Milliana. She was able to defeat Erza’s Adamantine armor. One after another, Kagura released deadly blows to Erza and countered every move that Erza threw at her.

I think Erza was a bit regretful and somewhat hesitant, specially after knowing that Kagura was Simon’s sister. And after Erza told Kagura that it was her fault why Simon died, Kagura just suddenly burst with more anger and she could no longer control her emotions anymore. As a result Kagura finally unsheathed (draw) her sword.

At this point, there are a few things that we want to know as the result of Erza vs Kagura’s battle:
1. Now what Kagura draw her sword, what kind of power does her sword has?
2. Whose blood did we saw on the last page of the chapter Erza vs Kagura?
3. Did Erza got defeated by Kagura?

I’m not really sure what kind of sword does Kagura has. I mean I haven’t seen her unsheathed it before. Most probably it’s some kind of a locked/hidden magic that she must only use when she really needs it.

Second, the blood that we saw might be Erza’s blood. But I was also thinking it was from another character, perhaps Milliana or someone else. Minerva might have suddenly pop out and placed Milliana in front of Kagura. Another theory is that Kagura did hit Erza but Erza was able to block her attack while risking an injury.

Either way, I really can’t believe it if Erza will be defeated by Kagura. And most definitely, she Erza won’t die either. I’m really excited to see what will happen next on Fairy Tail 315.

Fairy Tail chapter 315 will reveal to us the conclusion of Erza vs Kagura’s battle.