Here we have a first look at the upcoming Asus M5A99X EVO motherboard which will make use of the upcoming black socket AM3+. The M5A99X Evo is based on AMD’s 990X and SB950 chipset. This new motherboard is designed for the new AMD FX series processors codenamed “Zambezi” capable of running 4-core, 6-core and 8-core processors. 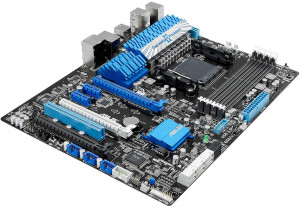 Based on the looks of the motherboard, this could be one of Asus mainstream or high-end black socket AM3+ motherboards. This new monster mobo is powered by 8-phase Digi+ VRM cooled by a new and large heatsink design.

There are also lots of great features that this new motherboard has to offer that will make any PC enthusiast, especially AMD lovers, to drool. Features like SATA 6.0 Gbps, new retention or CPU holder, UEFI (which enables this motherboard to boot from larger than 2.2TB drives) and much more are already incorporated in this mobo.

Obviously this is not Asus’ flagship motherboard in AM3+. They might release a new version of Crosshair that supports AM3+ or a new type of socket AM3+ motherboard.

Released date for Asus M5A99X EVO is expected to be sometime in June 2011. That’s next month already. So AMD Lovers don’t pull your wallets yet and wait for this new monster board.