Now that Dong Nguyen has finally taken down Flappy Bird for the reason that people have become very addicted to the game, it seems that some people are still very much into the Flappy Bird craze. Several versions of Flappy Bird like games started to come out, not only in iOS and Android, but in Web Browsers as well. I’ve seen those alternative Flappy Bird like games and none of them can even compare to the level of difficulty that this browser-based Flappy Bird has. This Flappy Bird Typing Tutor, created by Mr. Speaker will make you smash your keyboard. 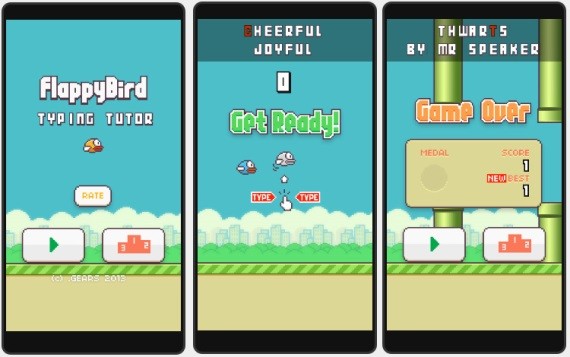 Basically the Flappy Bird Typing Tutor is just like the original Flappy Bird. It has the same graphics and gameplay, but with an added “sadistic” twist. Instead of tapping continuously on your screen, or clicking monotonously, if you are playing other web based flappy bird, this game will required you to type the words that are displayed on the upper portion of the screen for the bird to flap its wings and maintain flight. Just like any typing tutorial, this version might help you improve your typing skills or it might be the reason why you smashed your keyboard out of frustration.

If you think you have the guts and patience to try this challenge, head over to the games official page here -> Flappy Bird Typing Tutor and tell me how far have you gotten.

I’ve tried the game and didn’t last long. I stopped playing as the game is starting to drive me mad already.