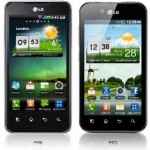 A Quick Look At The New Samsung Galaxy S II i9100