HTC Windows Phone 8X vs Nokia Lumia 920: Which is the better phone? 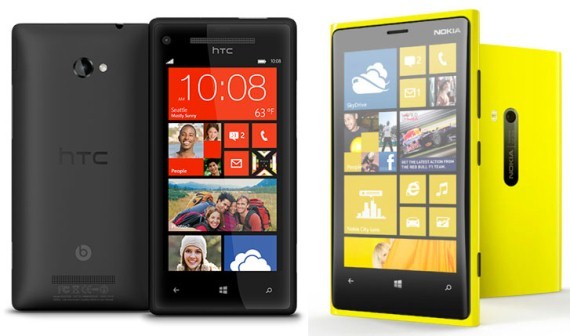 As you can see from the specifications table above, they have very much the same specifications. They are both powered by the same Snapdragon S4 Dual Core processor clocked at 1.5GHz, has the same 1GB memory, and runs on the same Windows Phone 8 operating system. It’s safe to assume that both of them performs at the same speeds.

But the Nokia Lumia 920 has more advantages compared to the HTC WP 8X. First, it has a bigger and better display. Its display is .3 inches bigger and is powered by PureMotion HD+ IPS display. It has a better (if not slightly better) rear camera sensor of 8.7 megapixels powered by PureView Technology and Carl Zeiss optics.

Both of them doesn’t have an expansion slot for microSD, but the Nokia Lumia 920 has a bigger internal storage capacity of 32GB, twice the size from that of HTC 8X. And lastly, it has a bigger battery capacity of 2000 mAh, compared to HTC 8X’s 1800 mAh battery.

I’m sure there are other features and specs that needs to be compared, like their prices. Unfortunately, as of today, the price indicated above is not yet confirmed. The HTC Windows Phone 8X might have a lower price compared to Nokia Lumia 920. But generally the Lumia 920 got the better specs and features compared to HTC’s Windows Phone.

If I would choose between the two phones, I’d go for Nokia Lumia 920. How about you? Will you go for Nokia, HTC or perhaps you are considering Samsung ATIV S?