Jailbreak iPhone 5 is on its way: Recently Jailbroken by Grant Paul

Many hackers are already itching to jailbreak iPhone 5. You might think that with the new iOS 6 and the new features, it may take sometime to jailbreak the iPhone 5. But just after a few weeks of its official announcement, the iPhone 5 was already jailbroken by Grant Paul. 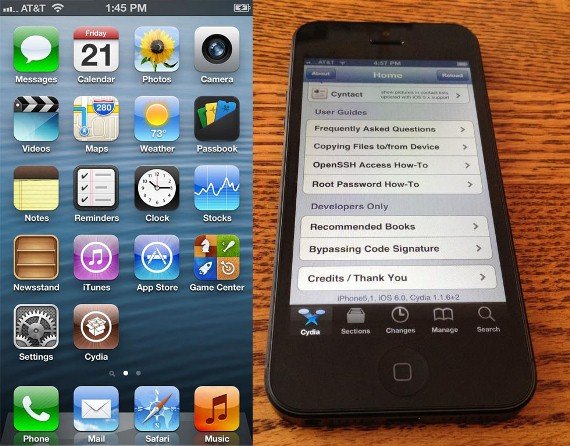 Grant posted pictures on his Twitter that his iPhone 5 has been jailbroken and it is running on Cydia. He did not provide any details on how he did it. But as of the moment, jailbreak for iPhone 5 is not yet released for public. But as you can see above, seeing a jailbroken iPhone 5 means it’s possible and sooner or later it will be rolled out to the public.

Jailbreaking an iPhone 5 is like Rooting an android smartphone. You get to do lots of stuff that you normally can not do. Jailbreakers use Cydia app to run and access tons of homebrew applications, customizations, tweaks, themes and etc., that normally does not work on a lock iPhone 5.

Like Rooting an Android smartphone, Jailbreaking has also become popular to iPhone users, as more and more iPhone users sees the value and usefulness in jailbreaking an iPhone. Not all iPhone users are techie people you know.

Anyway, let’s just wait for the public released for the iPhone 5 Jailbreak.