Jollibee has utilized the new technology called Near Field Communication or NFC in the form of happyplus card. If you have been watching foreign movies or drama wherein you saw them using their smartphones to pay for their commodities, then it’s the same technology that we are talking about. 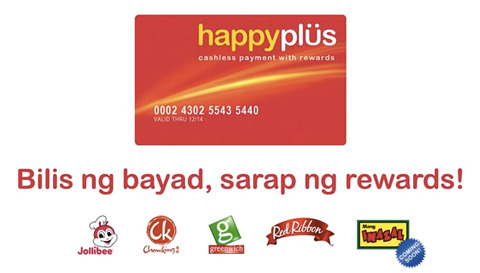 If you’re not familiar with Near Field Communication or NFC, here’s a definition:

NFC, short for Near Field Communication, is a short range wireless RFID technology that makes use of interacting electromagnetic radio fields instead of the typical direct radio transmissions used by technologies such as Bluetooth. It is meant for applications where a physical touch, or close to it, is required in order to maintain security. NFC is planned for use in mobile phones for, among other things, payment, in conjunction with an electronic wallet, and for setting up connections between Bluetooth devices (rendering the current manual Bluetooth pairing process obsolete).

In short, your smartphones with NFC can be used to pay like a debit card. The happyplus card is not a smartphone (it’s a card) but it uses the same technology.

If NFC is already present in our smartphones, then why did Jollibee use a card instead? Perhaps Jollibee wanted a soft introduction on how to use NFC. Most people, for example Samsung Galaxy S II users, don’t even know that their Galaxy S II has NFC. Or if they do know, they don’t know how to use it or what is it for.

So Jollibee introduced it in a more easy to understand solution, the happyplus card. It’s too early to say, but I guess the final outcome of this is that sooner or later, smartphones with NFC can also be used this to pay in Jollibee and other stores. To give you a better understanding on how this NFC and happycard plus works, watch the videos below.

The video below will explain to you where to buy, how to buy and register your happyplus card.

The video below will explain to you how to earn points and use the points for free food using happyplus card.

The video below will show you how you can join and win the happyplus card raffle. You could actually win up to Php 100,000 just by using happyplus card.