UPDATE: Bleach 577 was recently released, revealing to us how Nozarashi looks like in Shikai form. Check it below.

Bleach chapter 576 was recently released. The battle between Sternritter V a.k.a. Gremmy and Kenpachi Zaraki continues. It was a fierce battle as Zaraki continued to slash Gremmy one at a time. Well, you know how Zaraki enjoys slashing his enemy. Gremmy was about to be defeated when he imagined that he was going to lose. But thanks to Zaraki telling him that he was imagining his own defeat, Gremmy was able to recover and regain his composure. Now Gremmy unleashed his most powerful technique by doubling himself, and by doing this it also doubled his imaginative powers. Gremmy unleashed a meteorite thinking that it would wipe out Zaraki together with Seireitei. As expected, Zaraki was not worried about it. In fact he became more exited since it will be his first time to slash a meteorite. And for the first time Zaraki called out his Zanpakuto’s name…

UPDATE: Here’s how Zaraki’s Nozarashi looks like in Shikai form. Wow! It’s a huge sword. Way bigger than Ichigo’s zanpakuto before. I can’t imagine how huge Zaraki’s Bankai will look like. 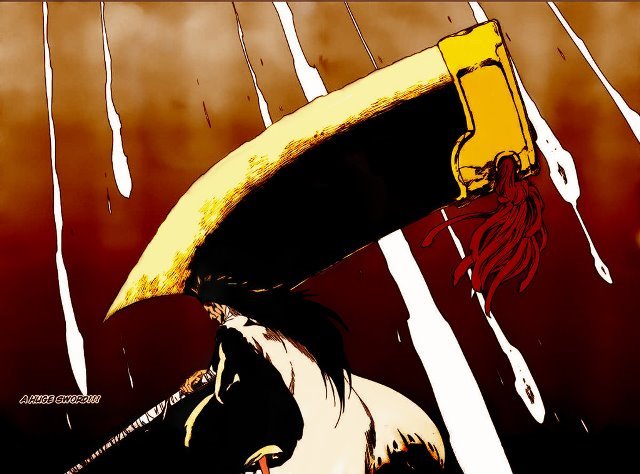 In the last page of Bleach chapter 576, Zaraki called out his zanpakuto. The name of Zaraki’s zanpakuto is Nozarashi. Finally he will be unleashing its shikai form. Definitely not Bankai though. I think if Zaraki has already learned how to use Bankai, it would have been very destructive.

I’m really looking forward to see how Nozarashi’s shikai form will look like. Probably it will be a huge sword or something with sharp spikes. Well that’s just my imagination though. Gremmy should be honored since he will be the first to see and taste Zaraki’s zanpakuto in shikai form. Bleach chapter 577 will be released next week. In that chapter we will definitely see how Nozarashi will look like. 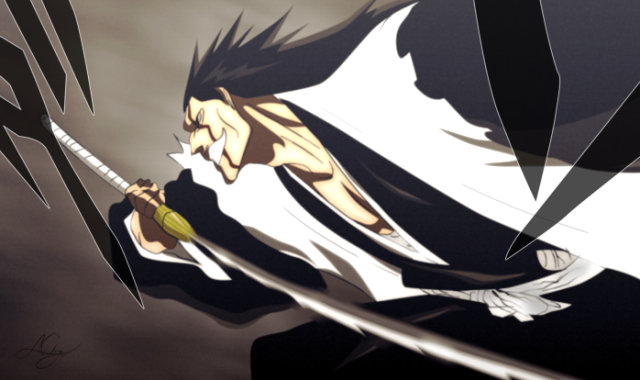 Well I did some research about what is the meaning of Nozarashi. According to immortalgeisha.com, Nozarashi, meaning “exposed in a field”, is a motif of skulls, bones, and/or skeletons. It is can be found most often in men’s items and other summer wafuku items.