Madara Uchiha has proven himself to be quite an adversary. In the recent chapters of Naruto Manga series, Madara Uchiha has revealed some of his fearsome powers. He also revealed that a part of Hashirama Senju was somehow embedded in his body. Now here’s the funny thing, because of Madara’s popularity, he was chosen to be the front cover of Vague Magazine! Actually I could not stop laughing hard when I saw his picture. 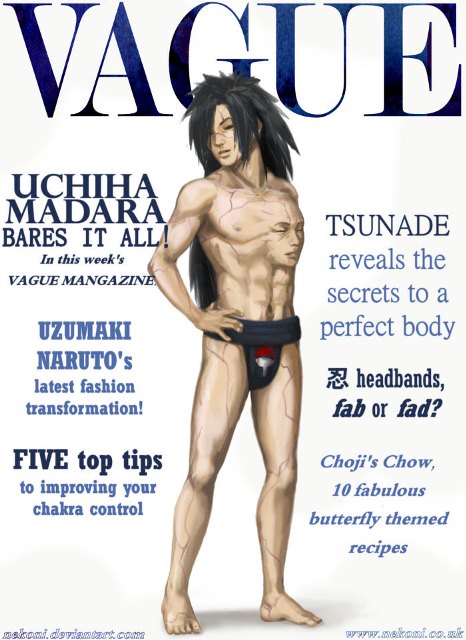 In this issue of Vague Magazine, “Uchiha Madara Bares it All”, revealing all his secrets. Also featured in this issue are; Uzumaki Naruto’s latest fashion transformation, Five top tips to improving your chakra control, Tsunade reveals the secrets to a perfect body, Headbands fab or fad? and, Choji’s Chow 10 fabulous butterfly themed recipes.

This was a fanart by a Deviant Artist Nekoni. If you like this Vague issue and has made you laugh (somehow) please share this to the world! XD XD XD