The most awaited AMD Radeo HD 6870 is upcoming and luckily we have already an idea what it looks like. A Chinese site has leaked a first press photo of AMD Radeon HD 6870 graphic card. This new monster card is powered by the 40nm Bartx (XT) GPU and supports DirectX11. The new Radeon HD 6870 can control five monitors at the same time!

Here is what the Radeon HD 6870 would look like. Photo courtesy of it.com.cn 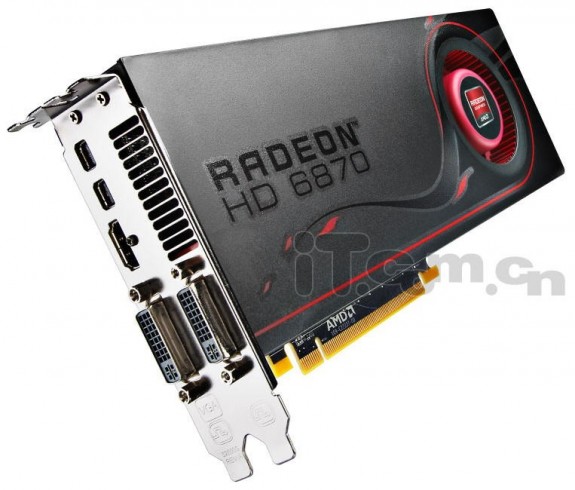 Here are some of the specifications of the new Radeon HD 6870:

I have qouted here an article by Nebojsa Novakovic from his “With AMD Radeon 6000 series GPUs coming, what happens with Nvidia?”

“But the HD6870 might cause even more of a stir. Even if it’s just a quarter faster than the reference HD5870, it will be hitting benchmark scores above those of all GTX480 cards. And as we’ve seen many times before, a win at the top of the GPU sweepstakes has a ‘waterfall’ effect that benefits the lower-end product sales for the ‘champion’ vendor, too.

So, what can Nvidia do to counter this AMD attack? At the GTX460 level, enabling more shaders – up to 384 – on the GF104 die might help quite a bit as long as Nvidia doesn’t lower the clock frequency to reduce the heat. If a GTX480 GF100 die has up to 512 shaders, then the three-quarters of that on the GTX460 should allow for up to 384 shaders.

Of course, Nvidia had no intention to enable those earlier, partly to keep the yields up and also not to cannibalise GTX470 sales. The extra 13 per cent or so speed-up from the extra shaders would keep the competition quite even with any HD6770 part.

The situation is more complex for Nvidia on its competitive approach to the expected HD6870. There is nothing to replace the GTX480 GF100 die until well into next year, so a combination of tweaks like a bit of extra clock speed and an improved memory controller, as well as enabling all 512 shader cores in selected GTX480 chips, that is, GTX485 or such editions, would make good sense.

Even if the combined advantages only bring, say 10 per cent extra real performance, it would help Nvidia stay close to AMD. But, unlike the GTX460 versus HD6770 case, the high end battle here would likely still be won by AMD whatever the case. Yet, the difference would be so small that Nvidia shouldn’t have a major problem selling the updated GF100 to its faithful fans.

Nvidia will have to work out another approach for the top-end dual GPU market, but it probably won’t be able to do that until its next generation 28nm chips are ready.”

The battle continues between the two. It seems that for the past quarter and past releases, AMD has beaten NVidia’s graphic cards.