Millenniata M-Disc (DVD) will store and save your data forever!

Millenniata M-Disc write once and read your data forever!

Do you have a problem saving and backing up your data in DVDs? Ever wonder how long will your DVD last? I’m sure you also have the same dilemma when you back up a data in a DVD. When you backup a data in a DVD, after a few months or years you burn it again to a new DVD to protect from data loss. Well Millenniata M-Disc will change that.

If you want to save and store your data in a DVD for a very long time, like for 1,000 years or forever, then you definitely need the M-Disc. First let’s get to know more about Millenniata’s M-Disc and what is it capable of. 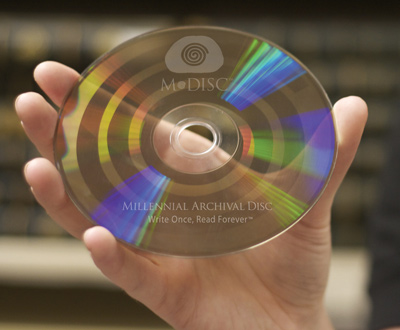 Basically the M-Disc is just like any other 4.7GB DVD out there except that it lasts longer and is more durable. The M-Disc looks and feels like any other DVD or CD that are currently in the market. But M-Disc are transparent and have an oddly pungent odor.

Millenniata M-Disc can be read by any DVD drive but you will need a special writer, specifically an M-Disc writer, to store and write data on the disc.

According to engadget the Milleniata’s M-Disc works by using a “synthetic, rock-like” layer where your data is “etched” into, and not just burned onto like other writable discs. This keeps the files from getting corrupted over time. Below is a photo illustrating the different layers of the M-Disc as compared to a conventional DVD. 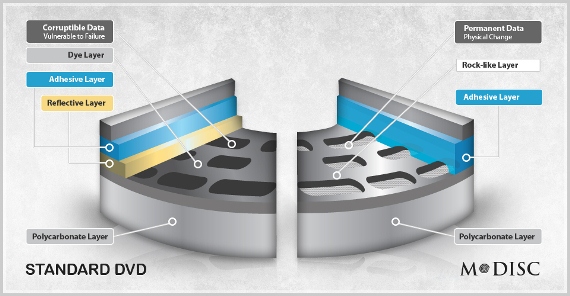 The M-DISC undergoes a permanent physical change that does not fade or deteriorate. Typical DVDs and CDs use dyes that break down over time resulting in corrupt and lost data.

The inorganic rock-like data layer is one of the unique features of the M-DISC setting it apart from DVDs and CDs. The voids and holes illustrated above do not degrade over time due to the natural processes that affect organic dyes used in all other optical discs.

Watch this video below, What makes a Millenniata’s M-Disc different from other discs:


Millenniata M-Disc are designed to endure. Watch this sickening video on how though the M-Disc are.


Now, isn’t that impressive? I’m sure by know your hands are already itching to have one of the M-Disc to save your precious data. So how much do one M-Disc cost? According to ExtremeTech, a Millenniata M-Disc price is expected to be around $7 which is more expensive compared to a DVD-R. Plus you will be needing an LG-Super-Multi Drive that is capable of burning/etching M-Discs or an M-Writer that costs around $145. Quite expensive, but its expected. Remember the first time when Blu-Ray disc came out? or even the DVDs? They where also expensive and in due time it got cheaper and cheaper. I hope this would also be the case for the M-Disc and it’s writer. 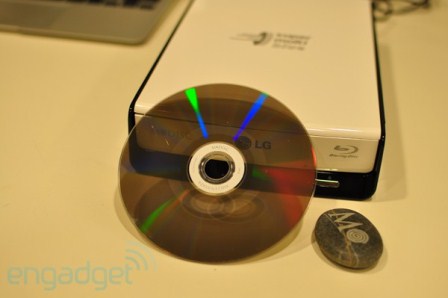 What I think about Milleniata M-Disc?

Well according to Milleniata, the M-Disc are ultra durable and can store your data safely for a thousand years or even forever. Now if you think it, who would even use a DVD after 20 years from now? A decade ago floppy disc were popular, but after a decade they are extinct. Would that be the same for M-Disc? How are you going to read an M-Disc after a hundreds of years from now, or just even decades from now when DVD drives are no longer available or considered obsolete, end-of-line?

I think, that’s not the idea of M-Disc is all about. From my perspective, it’s insane to say that you will still use the M-Disc after a few decades from now. But what is important is its durability. That is the winning factor of Milleniata’s M-Disc that other disc does not have.

You have seen the video about it right? It’s very durable and it can endure extreme conditions. Well that’s definitely what you need when you have an important data to store. It might not necessarily be stored forever, but at least even after a few years you are confident that your data are still safe and free from being corrupted.

I think Milleniata M-Disc are great, but I hope that soon enough cheaper but equivalently durable products would come out.

What do you think of Milleniata’s M-Disc? Place your comments below.