MyPhone A919i Duo is a Hit in Philippines

The new MyPhone A919i Duo was recently released locally with a promo price of Php 7,900 only for 1 day. The MyPhone A919i Duo is a cheaper alternative to the popular Samsung Galaxy Note 2 or Galaxy S3. It sports a huge 5-inch IPS display, runs on the latest Android Jelly Bean and is powered by a 1.2GHz Quad Core processor. Check out more details below. 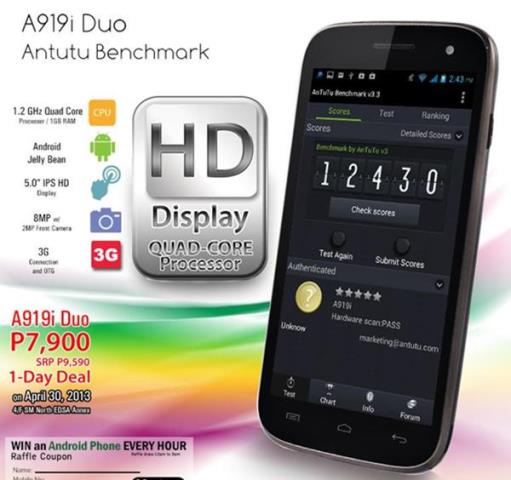 MyPhone has begun its Quad Core revolution, and one by one they are unveiling their quad core Android devices. The MyPhone A919i Duo is actually a rebrand of the Micromax A116 Canvas HD, also popular in India.

Aside from the features I mentioned above, the A919i Duo also has an 8 megapixel rear facing camera with AF and LED flash, capable of capturing 720p HD videos at 30 fps. It also has a 2 megapixel front facing camera for video calls.

But one downside I see in this phone is that it only has 4GB of internal memory. That’s really small compared to the 8GB or 16GB on other Android smartphones. You can easily max out the 4GB of storage with some apps and games. And I don’t think the 32GB of microSD expansion will be able to solve your storage problem since, by default, all apps will be installed in the internal memory.

Well, if storage is not an issue to you and you don’t plan to install tons of apps on this phone then you might enjoy its other features.

For the connectivity, it has WiFi, Bluetooth, HSDPA, USB OTG – meaning you can connect a USB flash drive in this phone, GPS, AGPS and more. Check out the complete specs below.

The MyPhone A919i Duo went on sale last April 30 for only Php 7,900. Regular SRP is Php 9,950. That’s still very cheap considering the specs and features you get from this phone. This phone is available in MyPhone stores nationwide.