MyPhone has officially launched their MyPhone Iceberg Android phablet recently. The MyPhone Iceberg belongs to the Aqua Series and features a 5.7-inch display protected by a Corning Gorilla Glass 2, and is powered by a Quad Core processor. Check out more features below, its specs, price, benchmarks and availability.

The MyPhone Iceberg features a nice 5.7-Inch IPS display at 1280×720 resolution. That’s even bigger than a Samsung Galaxy Note II‘s display. An IPS display is also better compared to your typical display since it provides a wider viewing angle and vivid colors. It features an aluminum body with a thickness of only 8.9mm and weighs around 220 grams.

Under its hood, the MyPhone Iceberg is powered by a Quad Core processor clocked at 1.2GHz, paired with a 1GB of RAM. It’s also built with a PowerVR Series 5XT graphic processor making sure that you are able to play your favorite Android games. The phablet is also built with 16GB of internal storage, finally a local phone with a big internal storage. But the problem is, there’s no microSD slot.

The MyPhone Iceberg also features Wireless Display or WiDi, enabling you to connect to an external display via WiFi. It also has Clever Motion that allows you to use gesture commands (motion control), somewhat similar to what we see on high end Samsung Galaxy smartphones. It also features a built-in anti theft software called TARA, that locks and encrypts your phone when someone has unsuccessfully tried to access your phone.

Based from NoypiGeeks, the MyPhone Iceberg has an Antutu Benchmark score of 12771. It’s not in the top of the line range, but it’s definitely a good score for its price. Below is a more detailed specifications of the phablet. 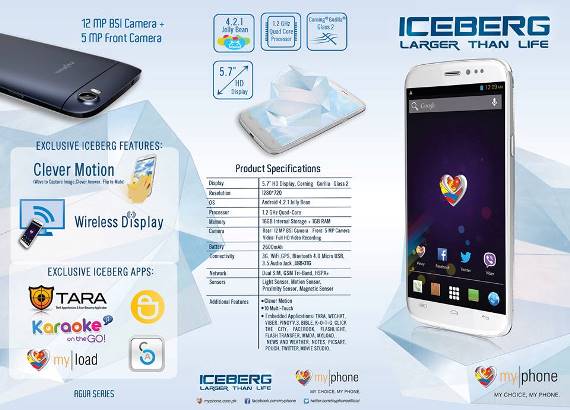 The MyPhone IceBerg has a suggested retail price (SRP) of Php 11,988 and can be paid via cash or in 24 months installment with the participating banks such as BPI, Metrobank, Citibank and RCBC.