Naruto 619 is the next chapter in the Naruto manga series. During the last episode Sasuke, Orochimaru and the rest finally arrived at their destination. Surprisingly, Orochimaru’s plan was to use Edo Tensei on the previous Hokage to revive them. Now it all make sense! Why didn’t they/we think about that before. The ones who could answer their questions and the ones who knows everything (well except for Kishimoto) are the previous Hokage. What will the previous Hokage say to them? Let’s find out in Naruto chapter 619.

UPDATE: Naruto chapter 619 was recently released. This chapter is entitled A Clan Possessed by Evil. What clan does it referring to? Is it Senju? Uchiha? Check out my review here. 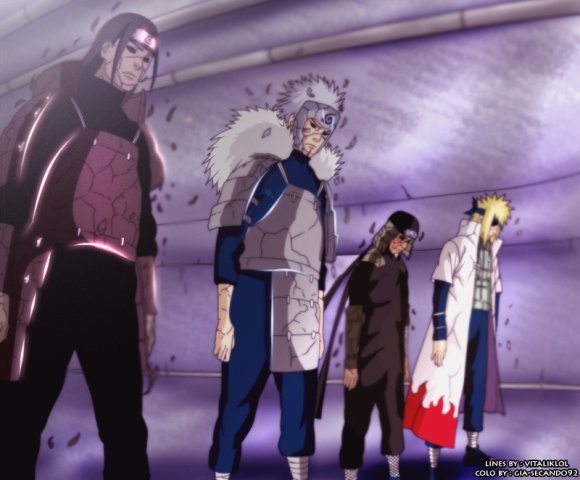 Now why didn’t I think about that. It’s so obvious, there are no new characters or “someone” who know everything. The ones who know everything are the people who witness history itself. And the only one who can give that is the previous Hokages themselves. They have witnessed the passed, they definitely know something.

Orochimaru has revived, Hashirama, Tobirama, Hiruzen, and even Naruto’s father Minato. I’m sure with the knowledge that they are about to reveal to Sasuke and the others, it would be enough to defeat or stop Madara and his plan.

Just like Madara himself said, there is no Shinobi in the world who could stop him, except for Hashirama. And there, Hashirama lives again. I hope we could see Hashirama and Madara fight again but I’m not too sure about that. It may or may not happen. The appearance of the four previous Hokage might be temporary only, or maybe not.

Either way, this is getting pretty interesting and I’m very much curious what will the previous hokage say to them. What do you think guys?

I’ll post Naruto 619 spoiler in this part if ever a real confirmed spoiler will come out. It’s usually 1 day before the chapter is released.

I’ll update this post once confirmed spoilers are available or when Naruto 619 manga chapter is released. Stay tuned!