Naruto 639 is just around the corner. This chapter is surely going to be an epic chapter. A lot of Naruto fans out there, including me, are anxiously waiting for the release of Naruto 639. During the last chapter, Obito finally became the Juubi’s Jinchuuriki. He’s much stronger now, even stronger than the four previous Hokage, and probably stronger than Madara. What will Jinchuuriki Obito do now? And what is Madara going to do? Let’s find out in Naruto 639. 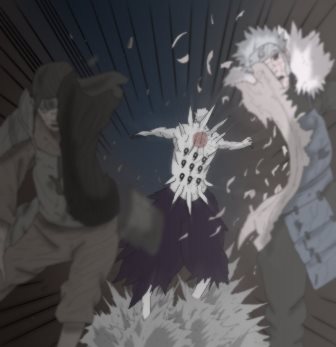 Naruto 639 is expected to be and epic chapter. We just saw Obito’s terrifying power when he freed himself from the barriers that the Hokages put up. And what’s even terrifying is that not even Hashirama and Tobimaru could stop Obito. Obito just, literally, went through them, smashing their Edo Tensei bodies.

Madara won’t sit quietly in the corner anymore. Because he knows the situation has change, and it’s going to be out of control if he doesn’t do anything about it. For a moment, even Madara admits that Obito might defeat him in some point if he doesn’t do something fast. I’m not really sure what is this “trump card” that Madara has yet to unleash. But it seems that this is going to be a big one, since he’s saving it for the last.

In Naruto 639, we might see something surprising. I’m expecting that Madara would stop Obito, and I’m not sure how. He might go head-on and defeat him in a combat, or he might have known a way on how to separate the Juubi from Obito. Since part of his body is Madara’s, I’m sure he’s hiding something and do something that will make Obito not control this war.

Naruto 639 is going to be an epic anticipated chapter. Right now, there’s no spoiler yet. But I’ll post confirmed Naruto 639 confirmed spoilers here, if ever someone leaks it or contributes one. But I’ll definitely post an update once the chapter is released, then I’ll post my review afterwards. Stay tuned!