Naruto 669 is the next exciting chapter in Naruto Shippuden Manga Series. This is really getting hotter, well literally on fire! Gai just used the final forbidden technique and opened the 8th gate, a.k.a Hachimon Tonkou No Jin. Gai is on fire now, his body is so hot that his blood is steaming out from his body. Gai is pushing his limits just to protect the people he cared, but at the expense of his own life. Can he somehow defeat Madara? Will this be the last we see Gai? Find out in Naruto chapter 669.

UPDATE: Naruto 669 was recently released. Naruto chapter 669 is entitled “Hachimon Tonkou no Jin”!. After Gai opened the 8th gate, he started unleashing powerful attacks to Madara. It seems that Madara is getting the beating. But Gai is also in grave pain as one of the effect of using the Hachimon Tonkou no Jin. Madara seems to be enjoying his fight with Gai. I won’t spoil you anymore. Just read the chapter! My question is, can Gai keep up with Madara? It seems that Madara is just warming up. 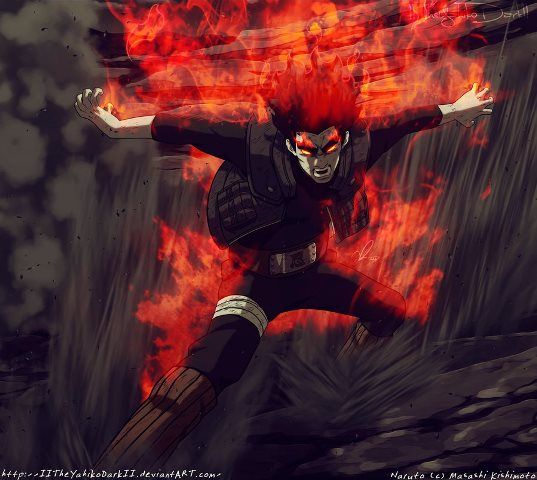 It’s all clear now, Gai opened the Hachimon Tonkou No Jin giving him tremendous amount of power. Opening the 8th gate will give the user powers equal to the Hokages, or probably even more. My prediction for Naruto 669 is simple. It is not Gai’s destiny to defeat Rikodou Madara. He might be able to land few powerful blows or delay him, but he is not the one to defeat Madara. I just hope that his sacrifice would let Naruto fully recover.

The previous chapter already had some flashbacks, just like predicted. In Naruto 669, we might be able to see some flashback again. But I do hope we get to see some good fighting scene between Gai and Madara. I just hope Kishi gives Gai more air time since we probably won’t be seeing him again after using the 8th Gate Forbidden technique.

Gai is an important and major character in the world of Naruto. Somehow I am hoping that after opening the 8th gate, Gai would survive his fight with Madara, by some miracle or healing technique. I’m sure many fans would also want Gai to survive this.

I am also seeing the possibility that in Naruto 669, the story will shift back to Sasuke, aside from flashbacks. I wonder what Team Sasuke is planning now. Probably Naruto and Sasuke will “dramatically” awaken at the same time. And by then Gai might have died already, making Naruto and Sasuke the last hope to win this war. Oh, let’s not forget Tenten ^_^

What do you think guys? I’d love to hear from you, just hit the comment section below.

Naruto 669 is expected to be released this coming Tuesday/Wednesday depending on your time zone. There is no announcement that Naruto chapter 669 will be delayed. Also spoilers aren’t leaked any more these days. It’s best to just wait for the chapter to be released.