Naruto 673 is the next exciting chapter in Naruto manga series. Finally Naruto and Sasuke have awakened, armed with new powers entrusted by the Sage of Six Paths himself. Gai was able to badly injured Madara using his final attack, the Night Moth. But Gai paid the ultimate price for activating the 8th Gate. Madara was satisfied with his battle against Gai, and he decided to end Gai’s life with his Gudou dama. But Naruto suddenly appeared and deflected Madara’s attack by simply kicking the Gudou dama. Now the battle between Naruto vs Madara begins. Can Naruto and Sasuke stop Madara with their new powers? Let’s find out in Naruto 673. 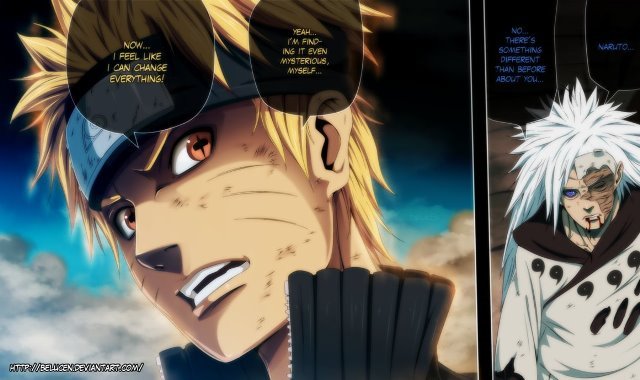 What Happened So Far…

In summary of the previous chapter, Naruto and Sasuke have finally awakened. They are now armed with new powers from Hagoromo, the Sage of the Six Paths, and they also have their own respective markings on their hand. Meanwhile, Gai unleashed his final move – the Night Moth. Madara was already injured with Gai’s previous attack, but he was not totally expecting Gai’s next attack. Madara could sense that Gai’ chakra is fading fast, giving us an idea that Gai will have to say goodbye very soon.

Gai then unleashes Night Moth onto Madara, breaking Madara’s rib cages and also destroying most of Gai’s internals and bones. Madara is now badly injured thanks to Gai’s Night Moth. Gai is now unconscious after delivering the final blow. Madara thanked Gai for the battle and sends his Gudou dama to finish Gai. Naruto suddenly appears and deflected Madara’s attack by simply kicking the Gudou dama back to Madara, almost hitting his face.

Madara senses that there is something different about Naruto, and Naruto plans to unleash his newly acquired powers on him. Can Naruto defeat Madara now?

Okay, if you look at it, it might seem to be an unfair fight. Why? Naruto is fully recovered plus he suddenly levels up with all new powers. Not to mention Sasuke has his own share too. Unfortunately for Madara he is already badly injured thanks to Gai’s Night Moth. If Naruto and Sasuke joined together to fight Madara, in their current situation, Madara might not stand a chance and could be defeated easily.

But what if Madara has still more tricks. Since he has Hashirama’s cells into his body, he might be able to regenerate and heal his body fast. If this happens the battle would be even, and Naruto might need the help of Sasuke to defeat Madara.

I’m really excited to see this battle. But I’m just thinking, what if Madara is not the ultimate boss in this war? What if Naruto and Sasuke’s ultimate boss is the holy tree itself?

Oh by the way, it seems that Gai won’t be dying after all (if the spoilers and what I think it is is correct). In the spoiler below, Naruto did something to Gai that puzzled Madara. Good news Gai fans!

Naruto 673 spoilers are out early this week.

Madara: !
Madara: The chakra at the tenketsu doesn’t go out?
…what does it mean? what on earth has he done!?
Madara: Like he stopped the end/conclusion of hachi mon(the 8 gates) or something…!?
Madara: !!

Madara: The recovery is yet to complete (/I haven’t yet completely recovered) …is it the reason!?
Madara: Nope…! His powers have suddenly developed!?
Naruto: Son! Lend me your chakra ttebayo!!
Son: Sure thing!!

Please leave your comments on what you think about of the current events that are happening in the current Naruto manga chapters.